The search is for pair-produced WIMPS, where the presence of the interaction is detected by the observation of an ISR photon and nothing else. At ILC (but not LHC) this kind of interaction can be described in a almost model-independent  way with EFT. Apart from the obvious ee→nunu + ISR ireducible background, also ee→ ee (down the beam-pipe)  + ISR are the backgrounds. No dedicated signal simulation is needed; one can simply reweight  the ee→nunu + ISR gamma-spectrum (as a function of theta and E_gamma)  to be that of any signal

This benchmark in particular can probe two features:

The main (and only) direct observables for the signal is the momentum of the ISR photon, The physics observable is the exclusion/discovery WIMPs in the mediator-mass/coupling plane for different lorentz-structures of the interaction. 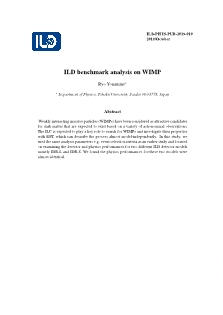 Photon reconstruction : The number of reconstructed photons per generated photon as a function of the signal photon energy. 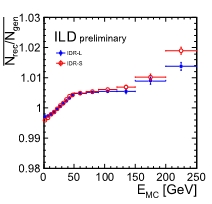 Photon reconstruction : The number of reconstructed photons per generated photon as a function of cos_theta (left : plot only pfos identified as photon, right: plot all pfos passes cut criteria except for pid). 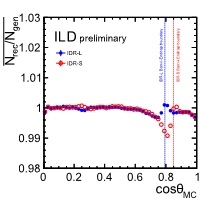 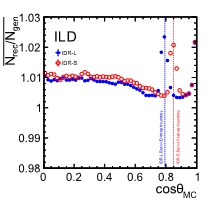 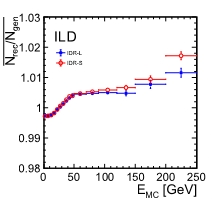 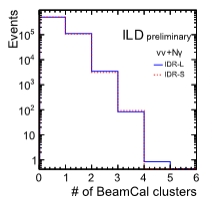 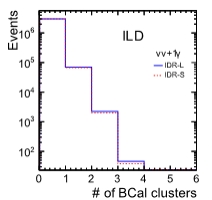 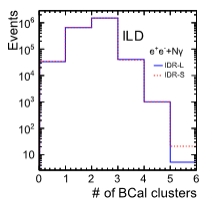 Update: Now Emax < 220GeV, which was introduced to avoid Z-return events, has been removed. (But still Emax<250 is set due to a technical issue in a macro.) 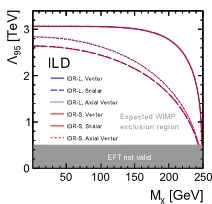 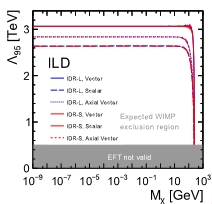