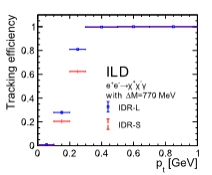 The tracking efficiency for chargino events. 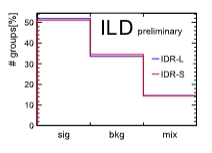 This plot shows how many of the groups created by the grouping algorithm are identified as signal, aa→low pt overlay and mix of both. Here only the sample where both the chargino decay tracks are reconstructed.

The model studied is a SUSY model with the lightest bosinos being higgsinos. Xi^0_2 and Xi^+-_1 are mass-degenerate, and very close ( ~ 1 GeV) in mass to Xi^0_1, which is the LSP. No other SUSY particles are assumed to be produced at ILC energies. The very low mass differences implies that the signal events resembles gammagamma events. Therefore, it is required that the signal events are acompagned by a detected ISR photon

This benchmark in particular can probe four features:

In addition, as for any missing pt-signal, hermeticty is also important.

As a main background, also the properties of the gammagamma→low pt hadrons is a main output: Cross-sections, branching-ratios to different vector-mesons, production vertex position.