Bring up to life an HBU (USB based)

This guide may be slightly outdated (2016)

This page describe the procedure of bringing a single HBU to operation. Some very basic component specification is summarized by Mathias: Operation and Instruction Manual

Further commissioning steps are described as well. 2 manuals have been written in the past: Operation manual written by Oskar in 2013 written for the USB labview control and commissioning procedure written by Eldwan.

The HBU needs 3 modules for the operation: The Power board (POWER), Calibration board (CALIB) and Detector interface (DIF). These 3 modules are inserted in the Central Interface Board (CIB), which has 3 pairs of flexlead connectors, through which it connects to HBU (1 pair connects to each slab)

POWER, CALIB and DIF modules can be replaced by careful pulling of the module out without tilting. There are 2 different flexleads: signal and power and they are not interchangeable. The flexleads should be both oriented with the printed label towards the CIB, as shown at the picture TO DO.

Boot LED blinks for ~1 s when the power sitches on. The LED indicates a phase where the firmware is downloaded from the flash to FPGA. If the light stays on, something is wrong.

Firmware can be update via Xilinx impact tool. TO DO

Easiest test if the DIF is working: Run the USB labview and check, if the "USB Open" indicator and "RESET_PROBE_REGx" indicators go green. The first connection after the first power on is not successful (the "RESET_PROBE_REGx" goes red). The Labview program needs to be stopped by the blue square stop button "Program Exit" and started again.

It is a good idea to test the POWER board first before connecting to the HBU. This only applies when the power board is replaced or reinserted.

Voltages generated by the POWER board can be measured on the CIB board on dedicated test points: TO DO The power board by default doesn't generate all power. Only the DIF is powered after first power-on. Volages at test points TO DO ....... must be 0V

Therefore the DIF communication has to be established and power has to be enabled (as described here) in order to measure generated voltages:

POWER board provide 3 independent high voltages. The selection of which will be used in each ASIC is given by the resistor configuration on the HBU (each ASIC can have different HV). The high voltage is never completely switched of: a pre-bias of ~10V is always present. The high voltage is enabled by ''Pre_Bias 2'' switch confirmed by the ''enable! set'' button in the ''Calibration'' tab of the labview, as shown at figure TO DO.

Slowcontrol files are text files, which contain text decimal representation of the binary configuration of each asic. Each SPIROC needs a separate file. The modification of slowcontrol files is performed via a labview program SC_SP2B.vi. 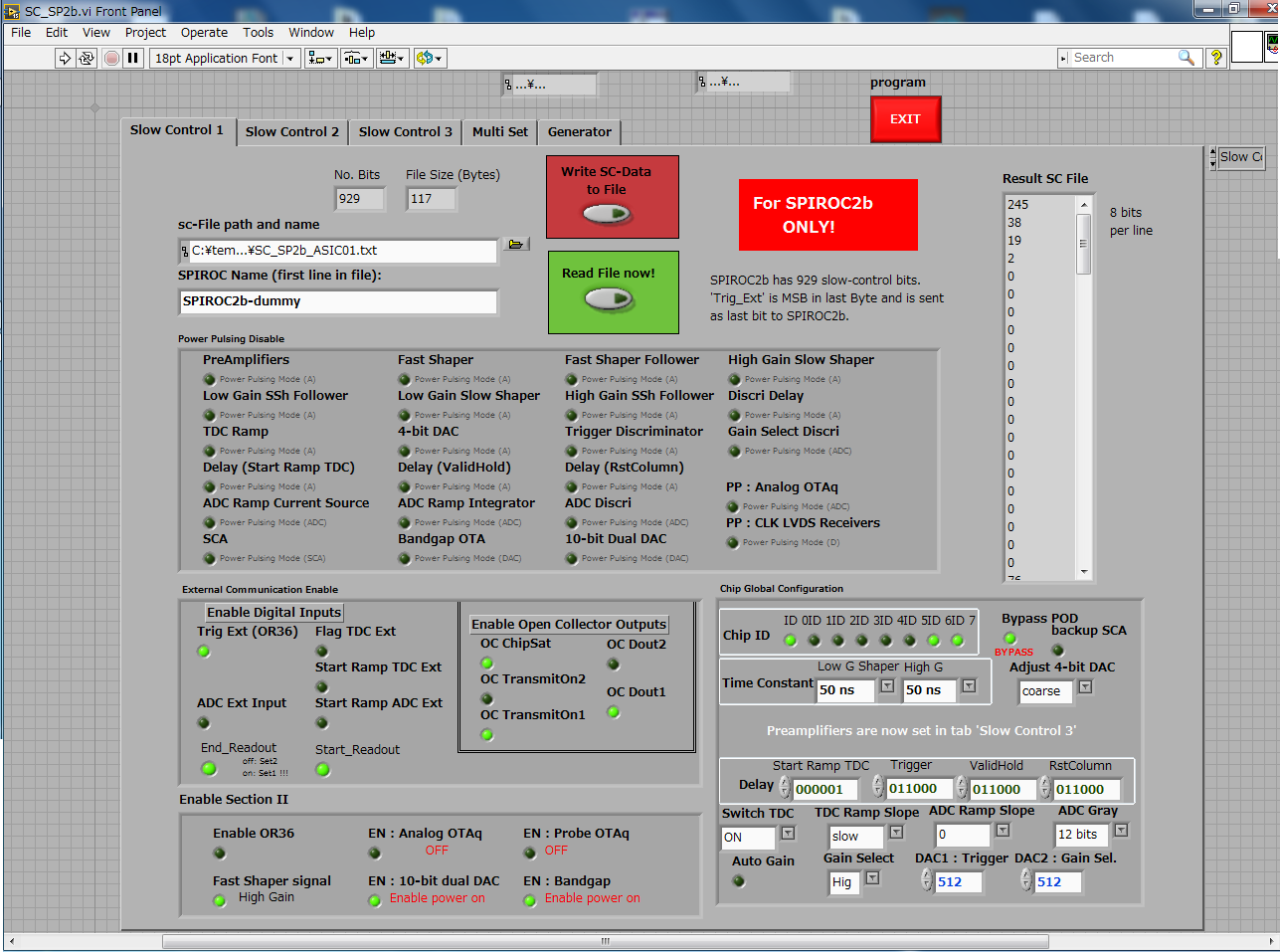 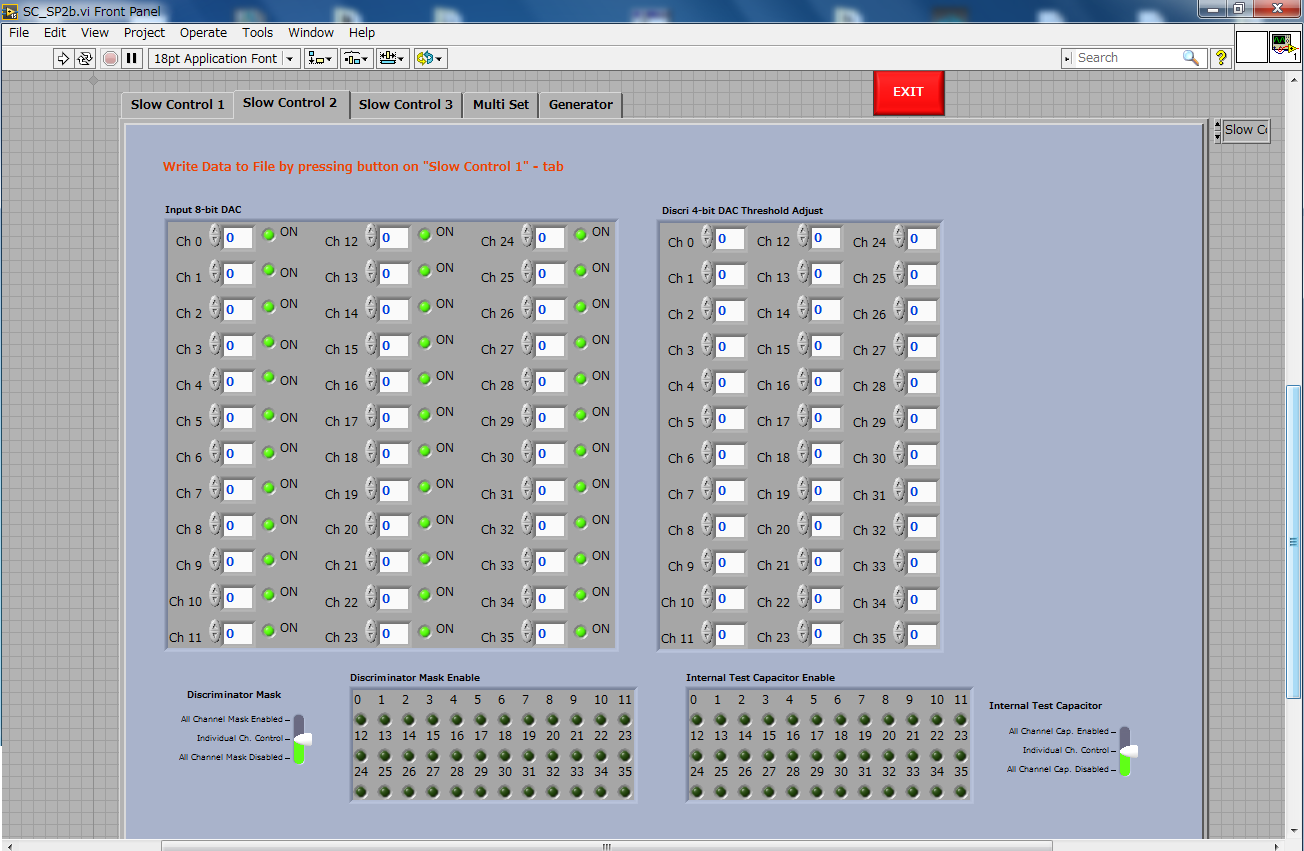 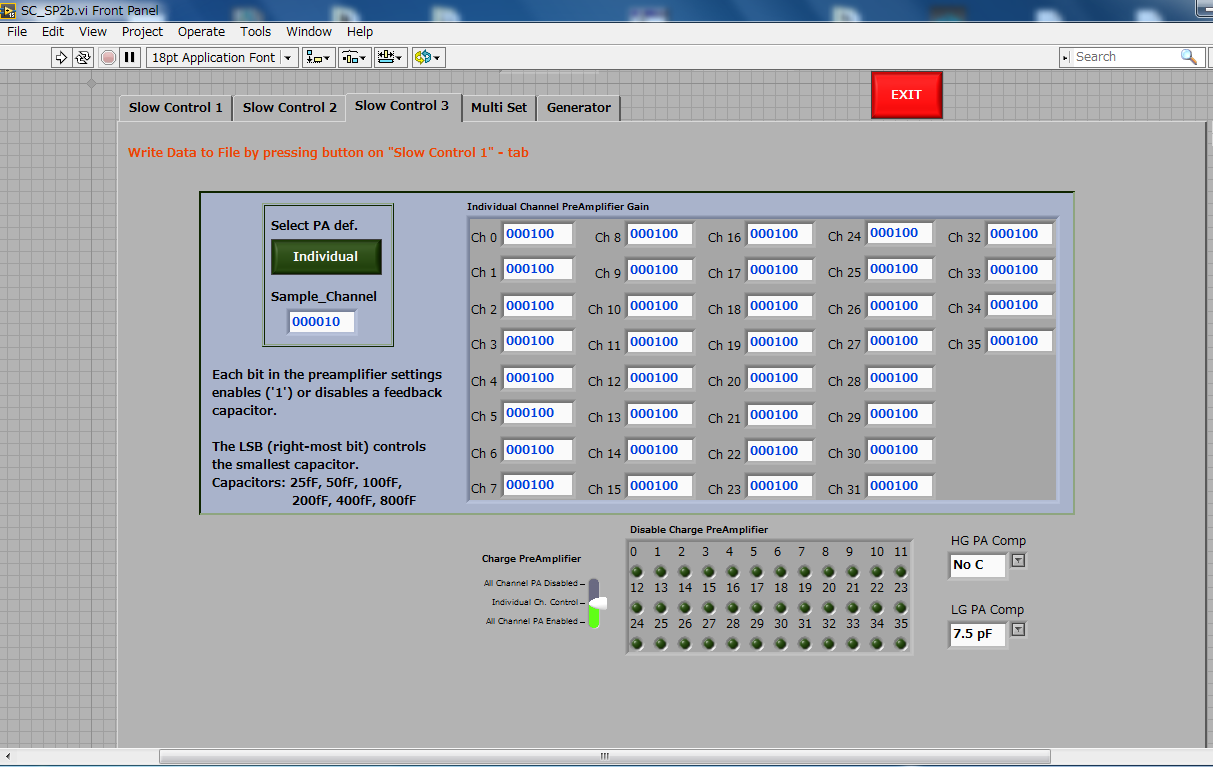 This programs overwrites the slowcontrol file without warning. It should be always used in a sequence: Set_file -> Read -> Modify -> write. It is not a god idea to change the filename between read and write.

Common settings for all modes

The Trig Ext (OR36) should be on and 'DAC1 : Trigger should be at some high level (>500 is usually sufficient)

The Trig Ext (OR36) should be off, DAC1 : Trigger should be set to some value obtained by the autotrigger threshold scan. 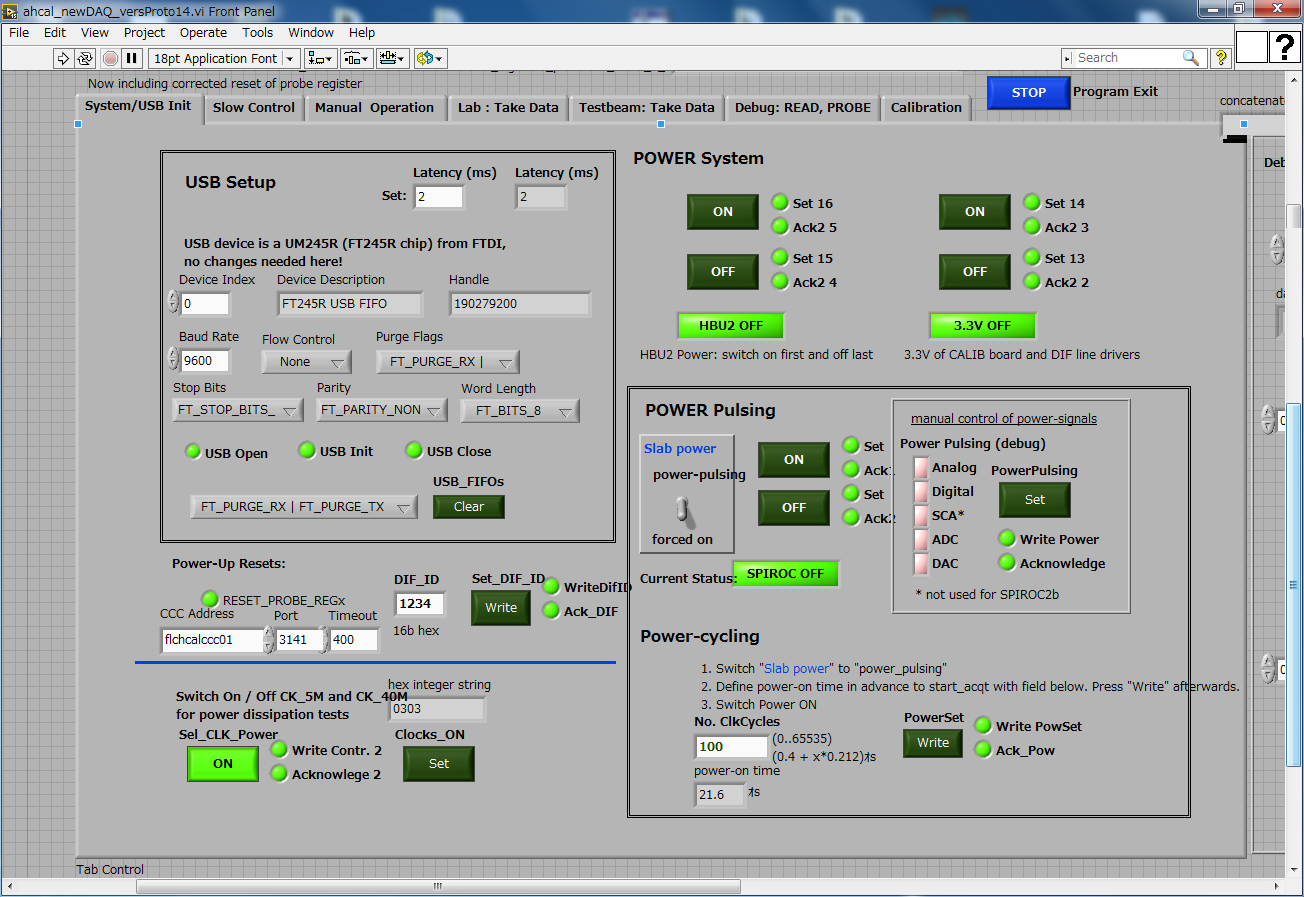 3 indicators should green if communication through the USB is established properly: USB Open, USB Init and RESET_PROBE_REGx.

The USB Open can fail in following conditions:

If the RESET_PROBE_REGx fails for the first time, labview program needs to be restarted. If it keeps failing, the DIF probably 'crashed' and HBU needs a power cycle .

Click on ON buttons in following following order HBU2, 3.3V and SPIROC

Click on ON buttons in following following order SPIROC, 3.3V and HBU2 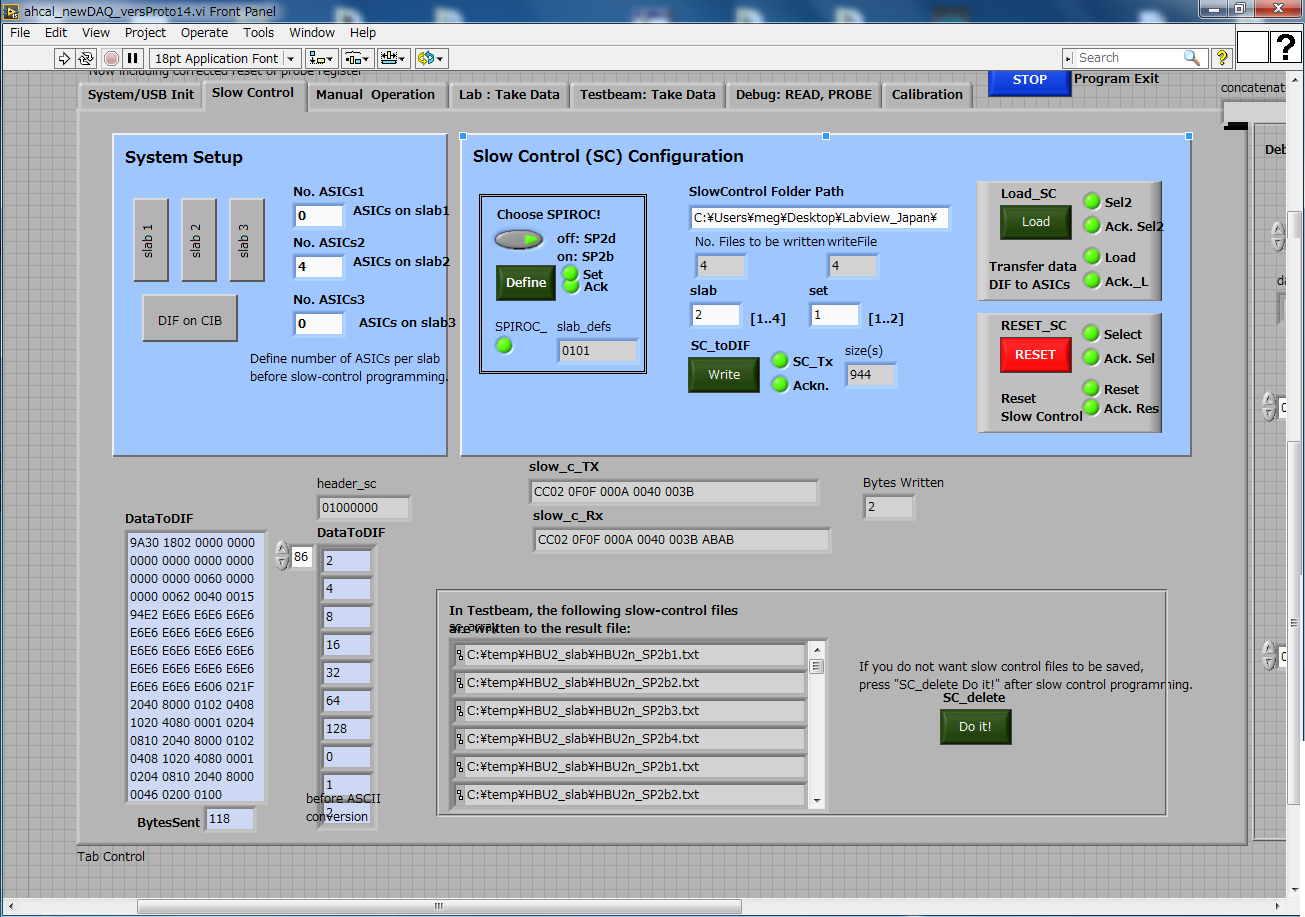 The path should end with \.

For single HBU should be the configuration left in defaults (as shown at the screenshot). Then press buttons in order

Each button should be pressed exactly once. 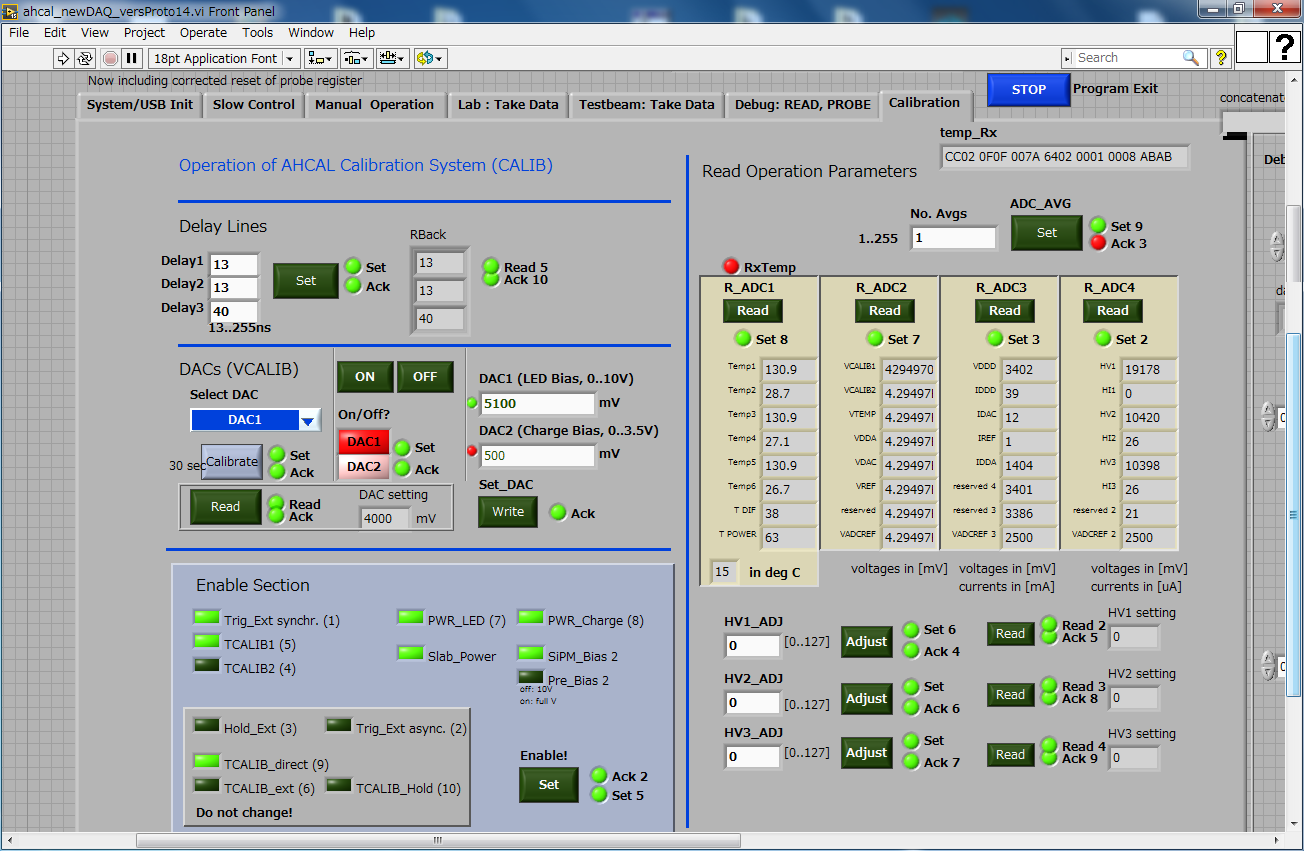 Following buttons should be pressed or (sequence order is not important)

LAB mode means to do measurements without particles. Just with internal LED system. Following settings are needed for LED measurements 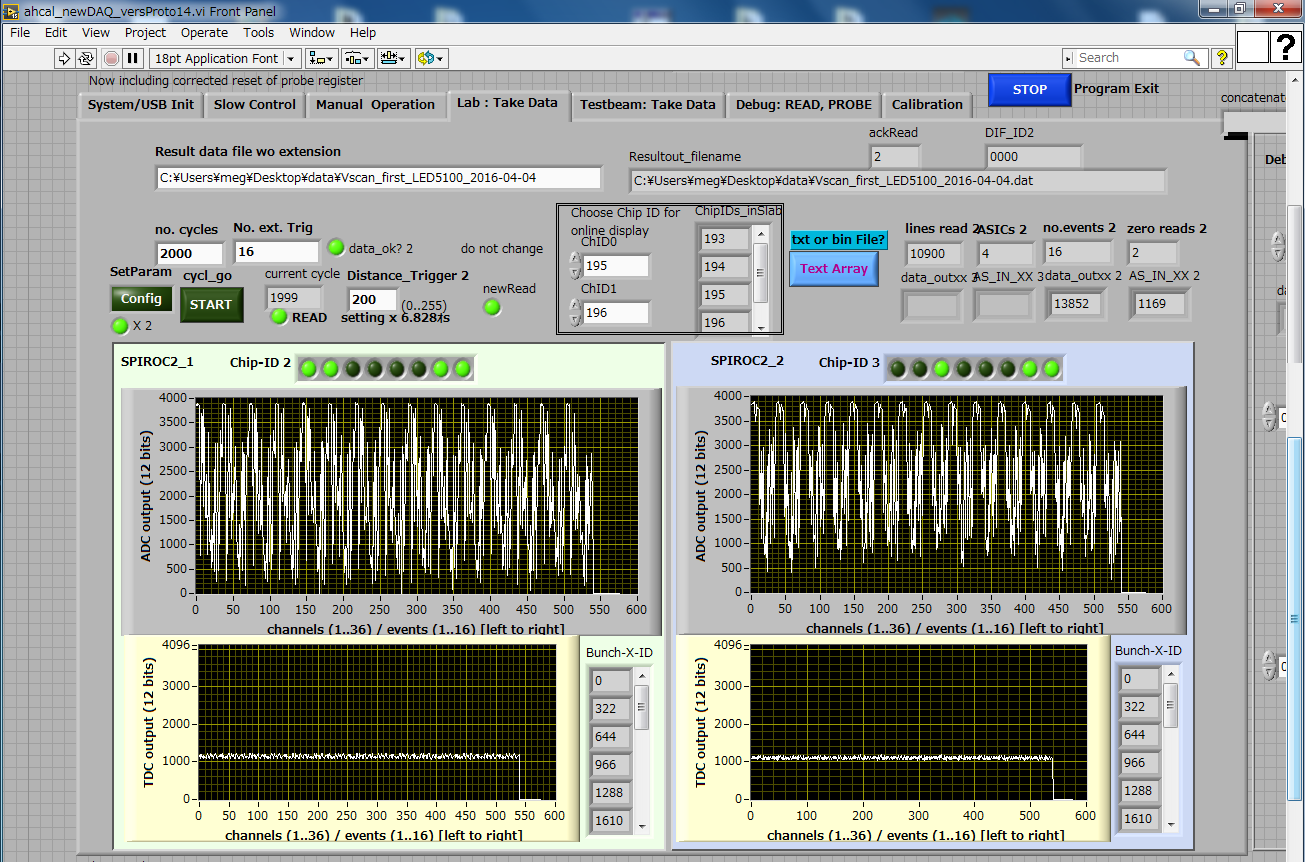 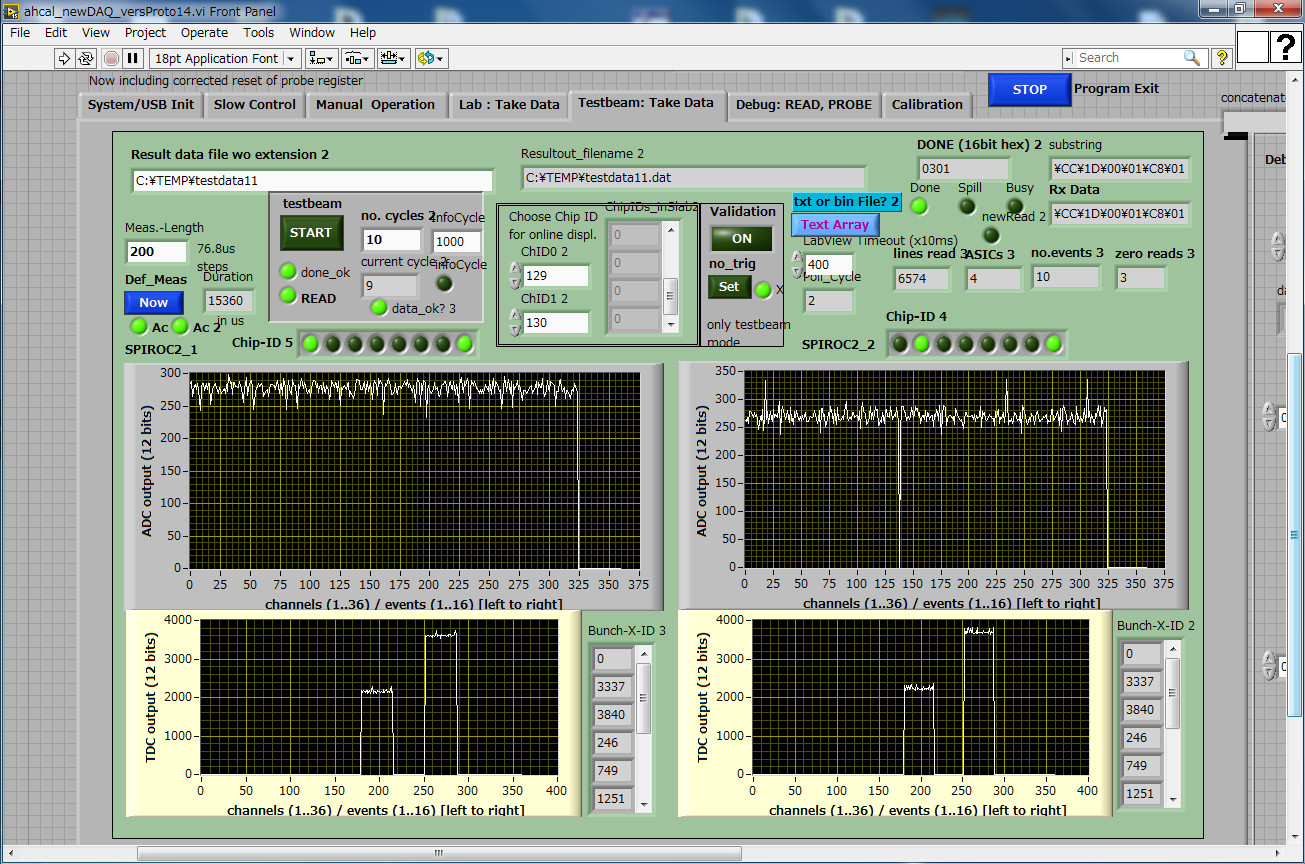 There are 2 modes, in which the data can be taken. These modes differ in the run parameters. Filenams are given with the full path and without extension.

If the filename remains the same, the data is appended to an existing file, not overwritten. Data and Time is added to the filename in the Testbeam mode.

The LAB mode configures just the number of external triggers (No. Ext. Trig) and the distance among them (Distance_Trigger 2).

The Testbeam mode sets 1 dummy trigger only and the distance is set to minimum or to the value of (Distance_Trigger 2) in the LAB tab (depends on the labview version used). The Meas.-Length defines the maximum time, for which the acquisition is allowed.

The resulting length is calculated and transfered to the HBU when Def_Meas NOW is pressed. If the duration is longer than 16 ms, Bunch-X will start counting from 0 each 16 ms.

Validation should be switched on in the Testbeam mode only when there is an external lemo signal connected, or when the LED light is recorded in the autotrigger mode. Internally generated LED triggers are validated automatically.

InfoCycle defines how many readout cycles will there be among the temperature readout. The temperature is saved in the text files.

See here for how to perform the Gain and Pedestal Calibration.

SPIROC waits fixed amount of time from the moment, when a trigger from fast shaper is detected and sampling moment. This time is called hold value. This value needs to be set experimentally. To do so, a set of slow control files needs to be prepared. There is actually a generator in the slowcontrol editor, which creates the set automatically.

The ratio between high gain and low gain values need to be properly calibrated, if data from both gain modes need to be combined (operation in autogain mode). The gain can not be usually extracted directly from the low gain mode, because the resulting Single Pixel Spectrum does not see the individual peaks. Therefore we calculate the gain only for the high gain mode.

The SPIROC allow operation in a special mode, where it converts and sends data from both memory cells, from high gain and low gain. This mode can be configured by the slowcontrol Switch TDC option set to off.

This way we record exactly the same events in high gain and low gain memory cells and we can determine the slope from the ADChigh gain vs. ADClow gain plot.