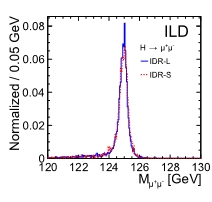 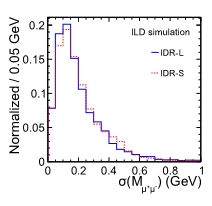 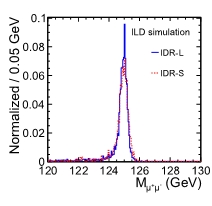 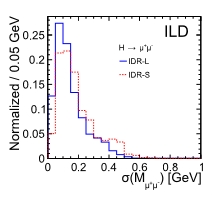 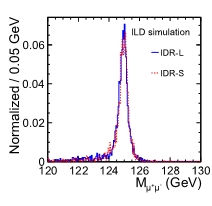 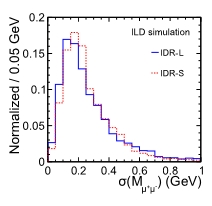 Only ~5% of events are the case with both muons flying in the endcap/forward region. We will not discuss it here.

A toy MC technique is applied by using overall M_{\mu ^+ \mu ^-} distribution after BDTG score cut to estimate the precision on \sigma \times \mathrm{BR}(H \to \mu ^+ \mu ^-). Two detector models and two beam polarization cases are considered. The next table shows the total remaining events in the full range (120 - 130 GeV) after BDTG score cut for each detector model and each beam polarization.

From the table above, N_{\mathrm{sig}} and N_{\mathrm{bkg}} in the full range are pretty much the same between IDR-L and IDR-S. The level of total background fluctuates due to the limited number of MC statistics, thus, we can conclude that the background distribution and the total number of backgrounds in full range are the same. For further analysis, we treat the background condition is common in IDR-L and IDR-S. We take the average number of N_{\mathrm{bkg}} and average slope in background modeling of IDR-L and IDR-S, for generating pseudo-background data. We perform toy MC using common parametrization for background and evaluate the precision. The next table shows the final result of the precision on \sigma \times \mathrm{BR}(H \to \mu ^+ \mu ^-) after 50000 times pseudo-experiments. The theoretical number is provided in addition which assumes 100% signal efficiency, no background, and no detector effects.

The final IDR note is available from here and click "ILD-PHYS-PUB-2019-002". The contents are only IDR-world.