We have measured increased noise of KPiX channels relative to the location to the KPiX power pads. As such the idea came up that the clock might induce signal in the channel due to capacitive coupling. This had been a fear for some time but the results presented by Uwe show strong evidence that this might be the case (see slides below). 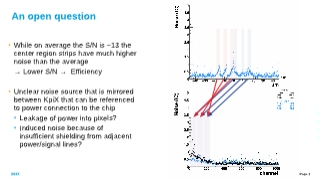 In a short discussion it came up that based on a Spice simulation by Ben the clock signal is almost a facto 10 too high. Dieter had, during the design phase of the cassette board, suggested some additional resistors in order to reduce the clock pulse height to ~35 mv. This was unfortunately not picked up upon in the making of the cassette board. The simulations by ben (schematics and results shown below) show an amplitude of 350 mv. 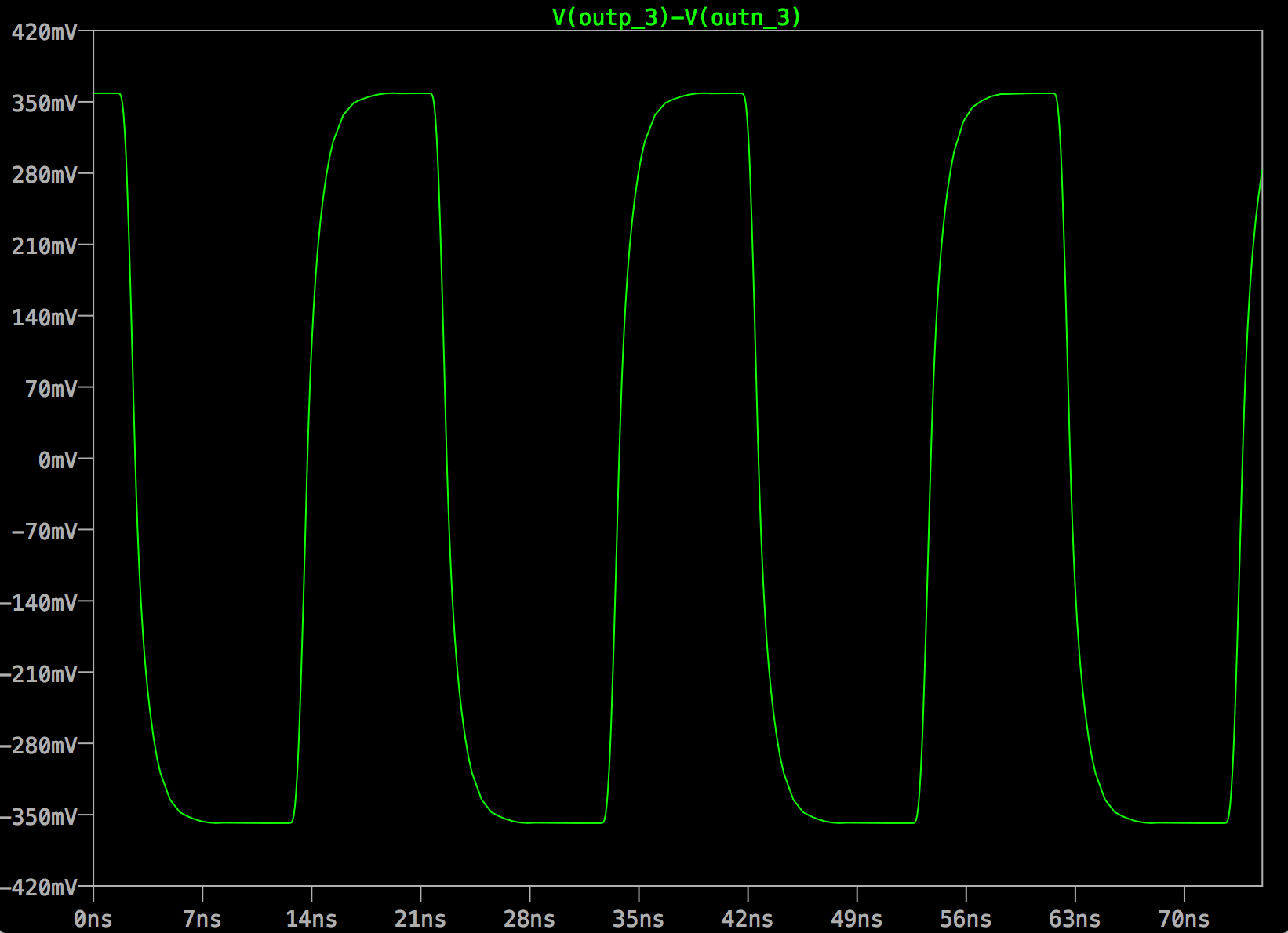 This supposedly could be reduced by either

The second option was ruled as R3 is next to the wirebonds and directly on top of the silicon sensor. It additionally would no longer terminate the clocks at 100 Ohm which might or might not be a problem.

Concerning the first option. How to add an R4 resistor to the cassette board are currently under investigation by Ben.

The clock LVDS lines were probed by Uwe between the DAQ board and the Cassette board. This was done by cutting away the isolation of the signal cable for the clock lines and attaching an LVDS probe to the connection.

The output was handed to an oscilloscope which was terminated at 1 MOhm. The results are seen below 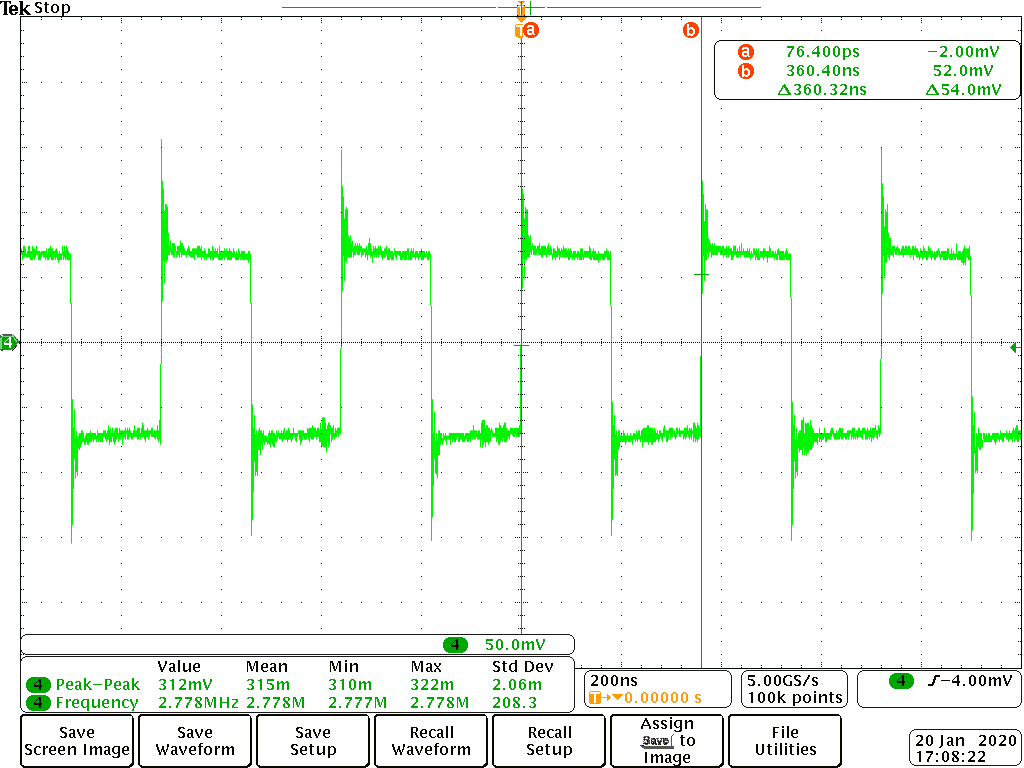 shown here is the clock output on the oscilloscope picked up from the clock lines via the LVDS probe outside of a data taking run. 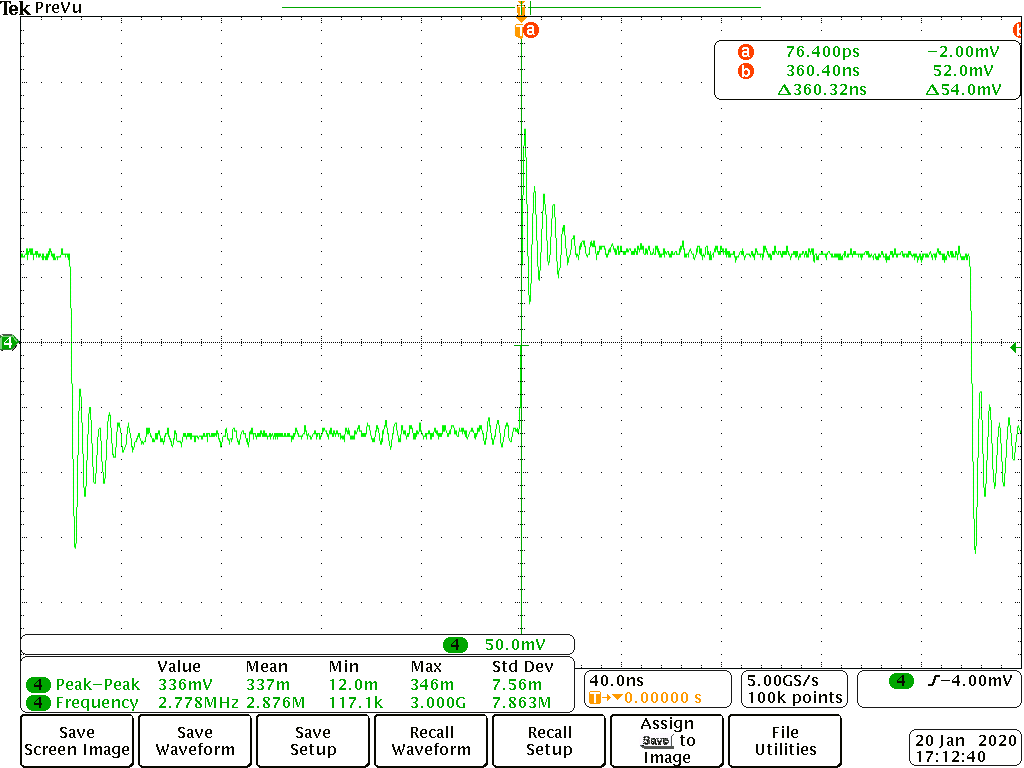 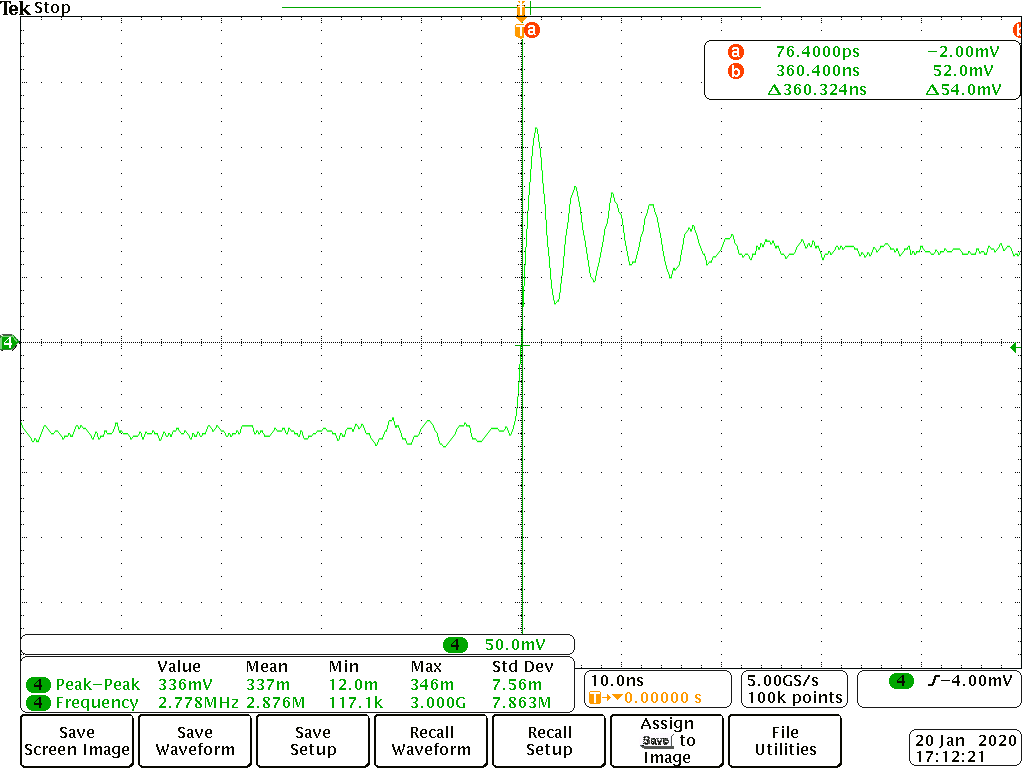 these two pictures are zoom ins of the previous pictures 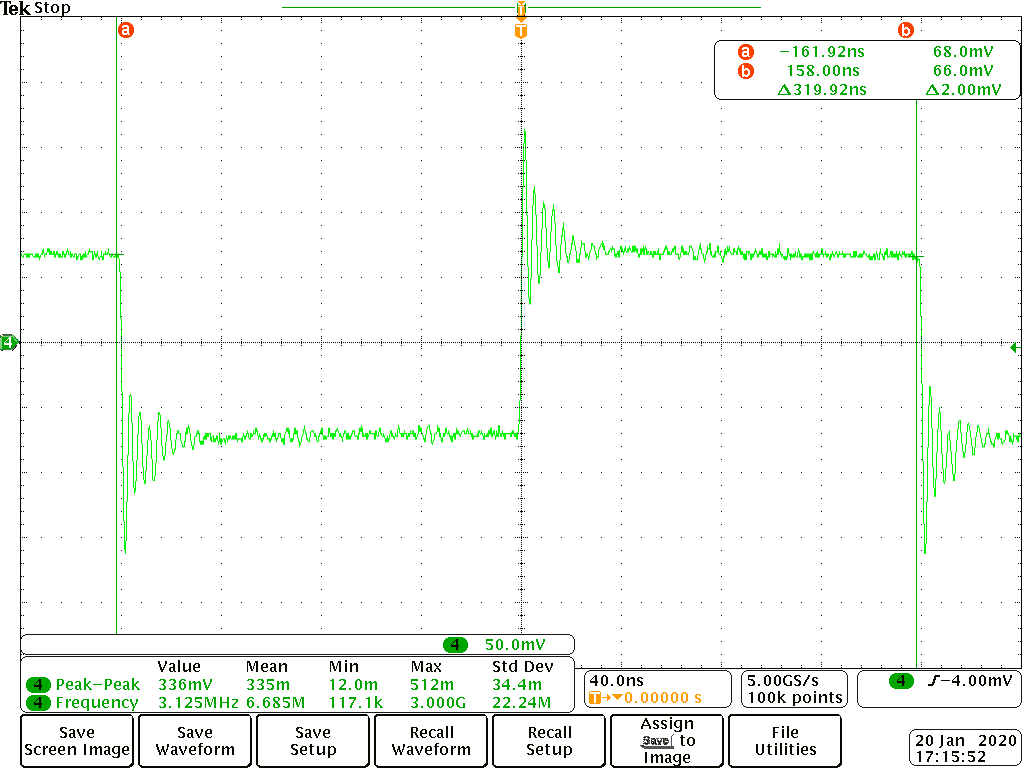 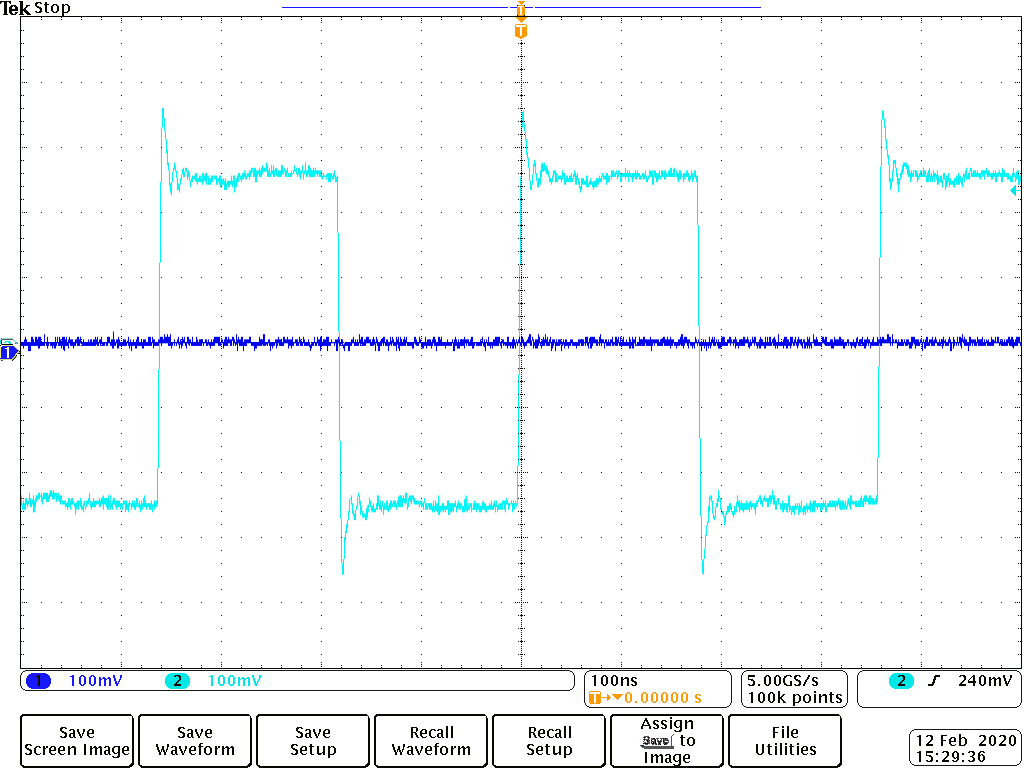 these pictures show how ti looks like at different clock settings which are switched between during running operation (Digi, Acq, Idle...).

In general the picture does not change. There is an overall difference between the measured clock and the clock from the Spice simulations. Whether this is due to differences between the simulation and the actual setup (e.g. in the simulations the trace resistances were set to R6=R7=10 Ohm while in truth they are 0.8 Ohm) or because of the different position for the probe is not clear yet.

The measurements from the day before were repeated this time by placing the LVDS probe onto the 100 Ohm termination resistor on the Kapton Flex.

This was done twice, once with a bare flex without a connected KPiX and one with a flex that is glued on top of Sensor S55.

A picture showing the setup is visible below 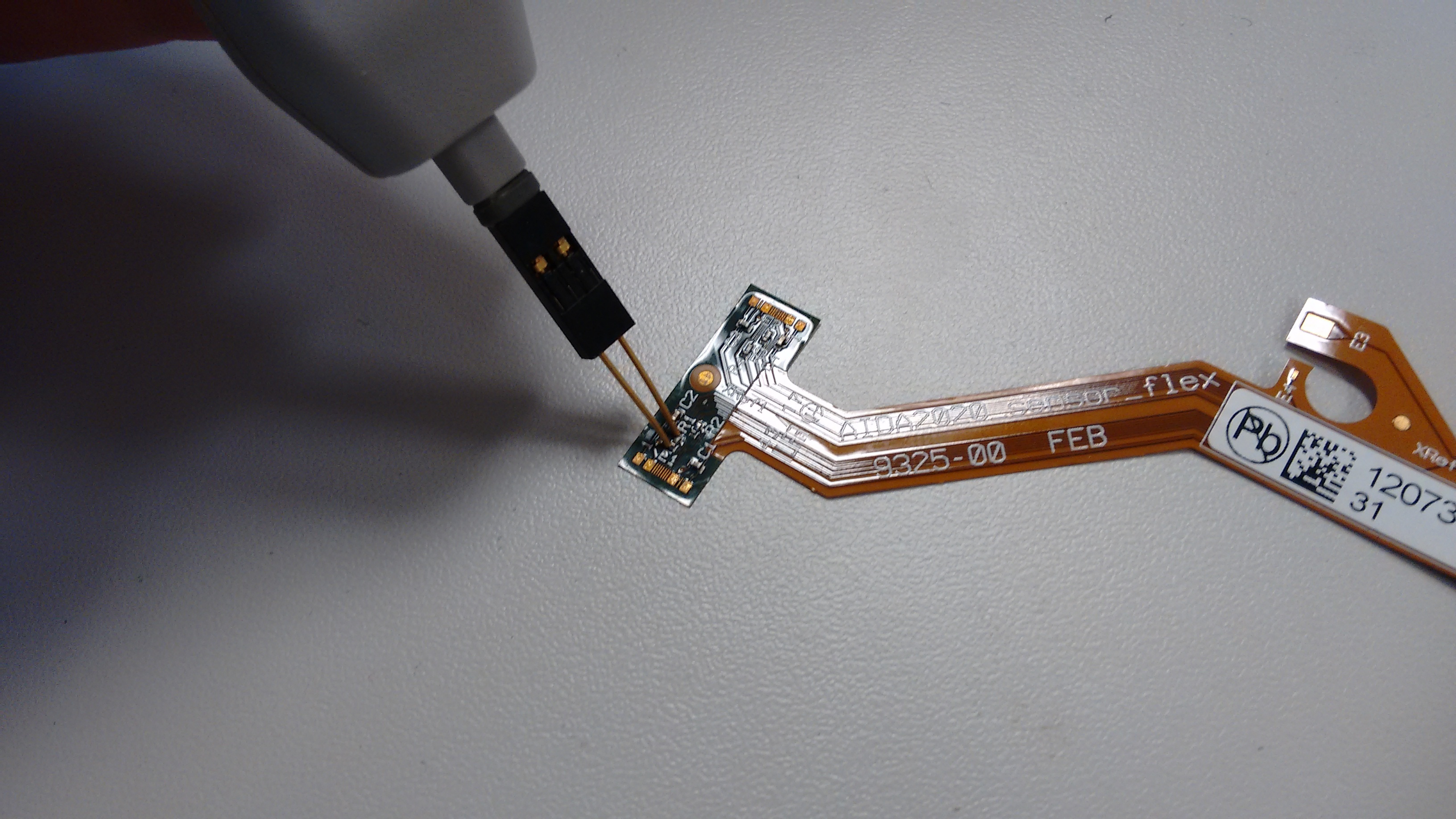 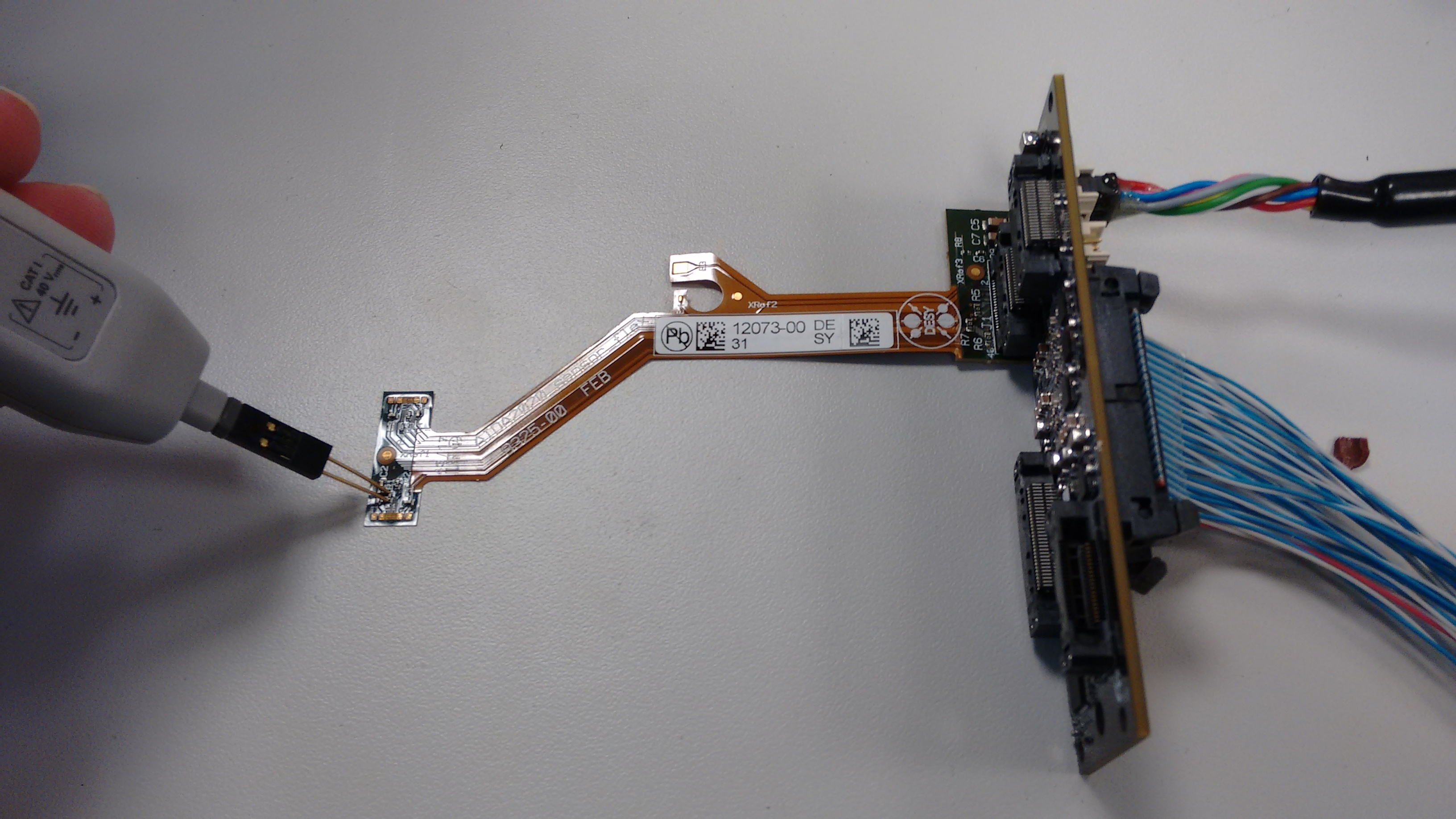 The setup with Sensor S55 was the exact same. As I was missing another arm to ensure I do not touch the wirebonds and ensure I do not scratch the sensor while take such a picture the decision was made to not take a picture of that. 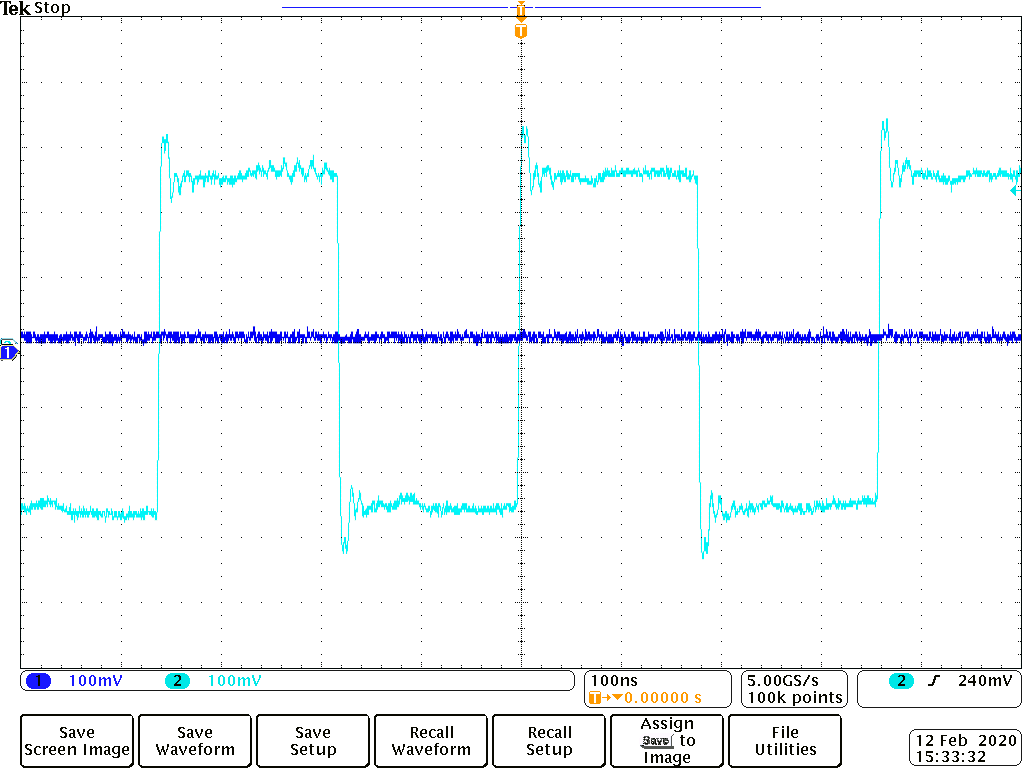 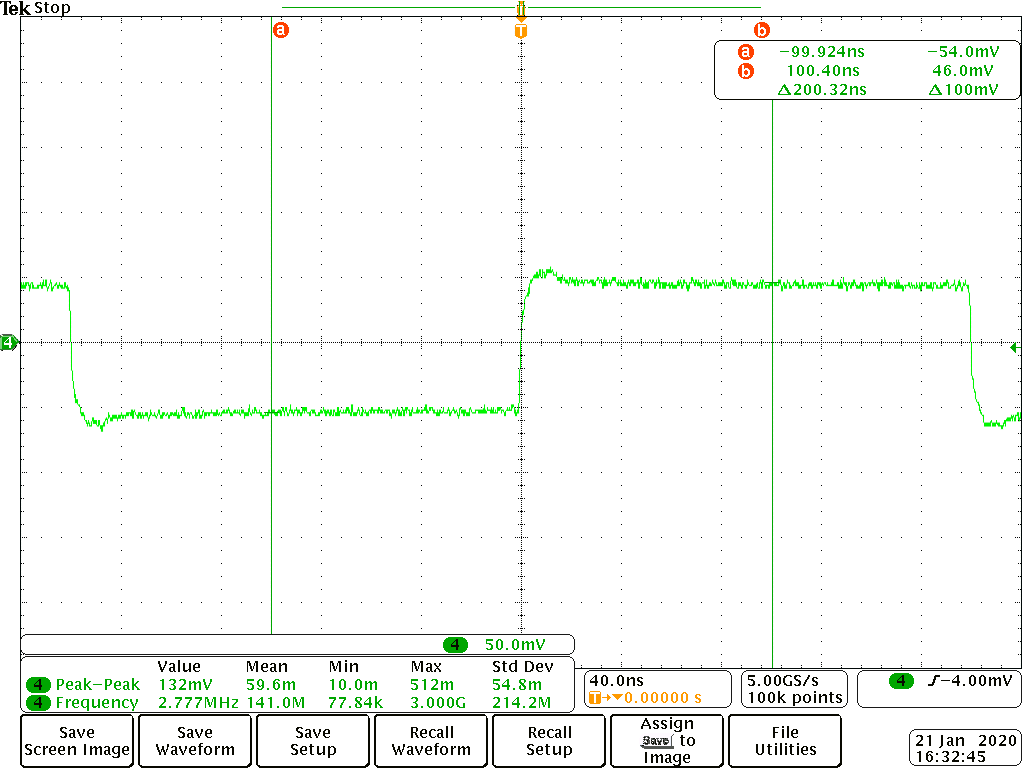 While the pictures looks basically identical. The difference between them is that the first picture is with the bare flex while the second is with the KPiX chip attached behind it. The chip was supplied with analog and digital power but the sensor itself was not depleted.

Again there are stark differences between the simulations by Ben and the measurements. Thankfully the afterpulses from the clock are no longer visible having been reduced by filtering on the cassette board. Still, the overall height is significantly lower than in bens spice simulations where he expected a peak to peak of 700 mV we see a peak to peak of 132 mV.

A suggestion by ben was that the reason for the much lower values in the measurement compared to the spice simulations are a 100 Ohm termination within the LVDS probe. He suggested measuring the values anew with a high resistance normal probe. 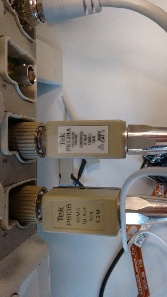 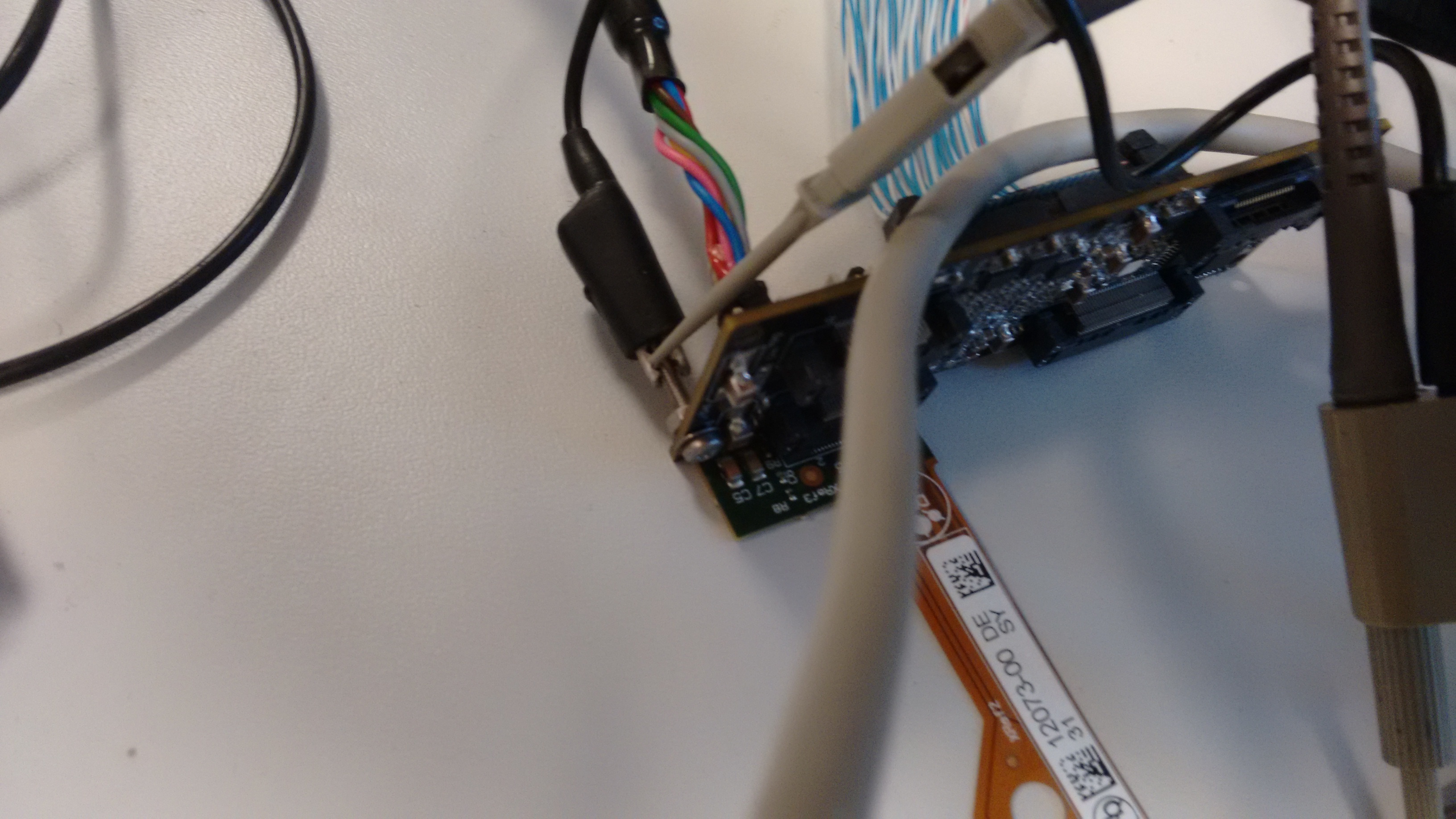 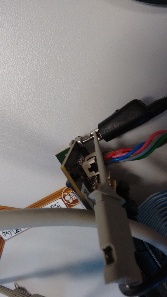 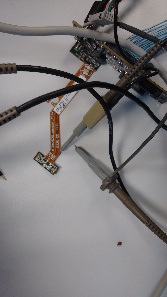 This was done with 2 10 MOhm probes. At different locations and configurations. One thing that was done is that it was tested whether it matters if the gnd pins of the probes are actually grounded or kept floating on the same potential.

For this reason once measurements were performed with both GND connections connected together and once with them connected to DGND as shown in the above pictures. 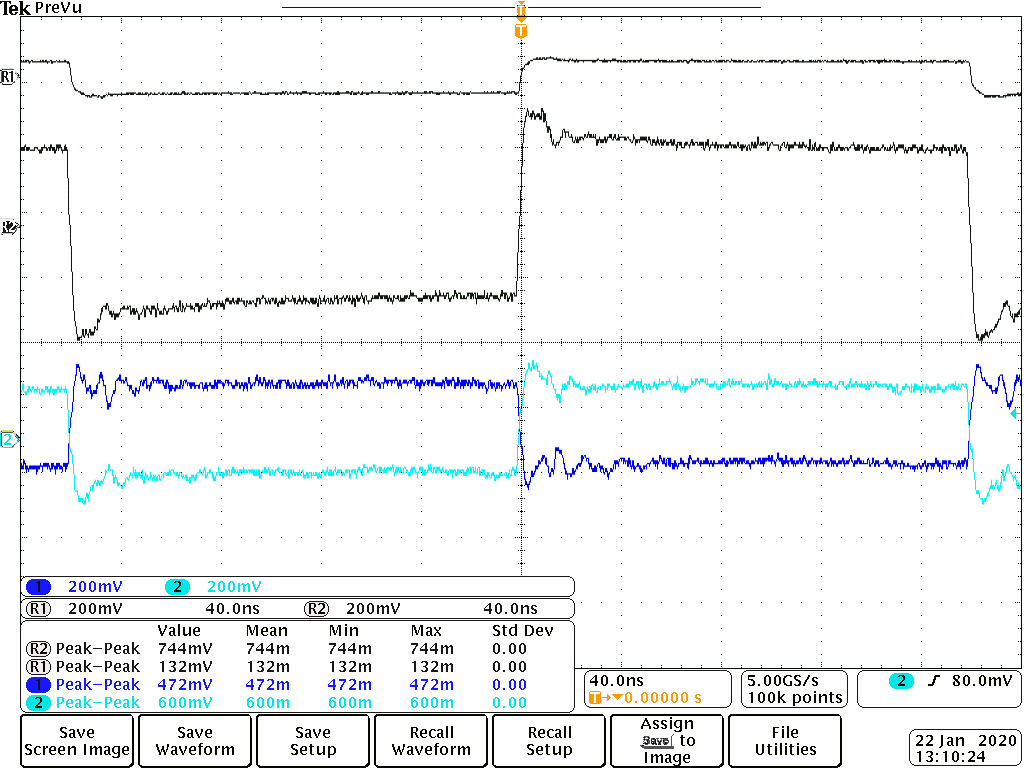 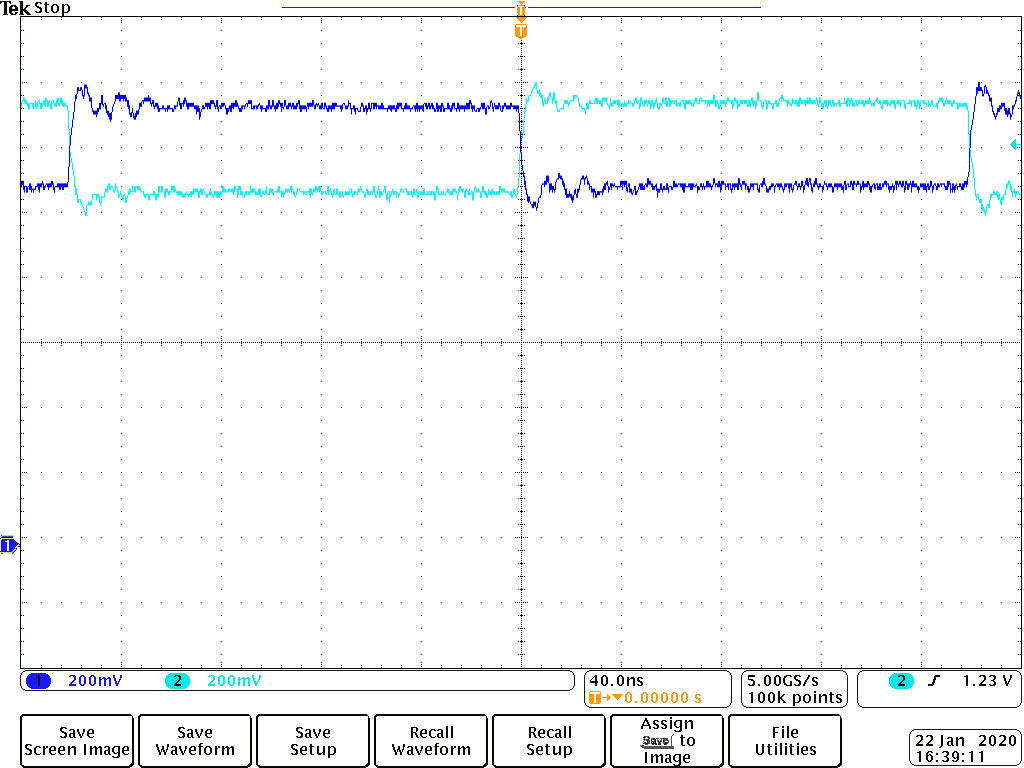 The second picture is a repeat of the dual probe measurement this time with both grounds connected to DGND on the cassette board. It now shows a massive offset of 0 but after calculating the difference between the two values there is no difference visible. 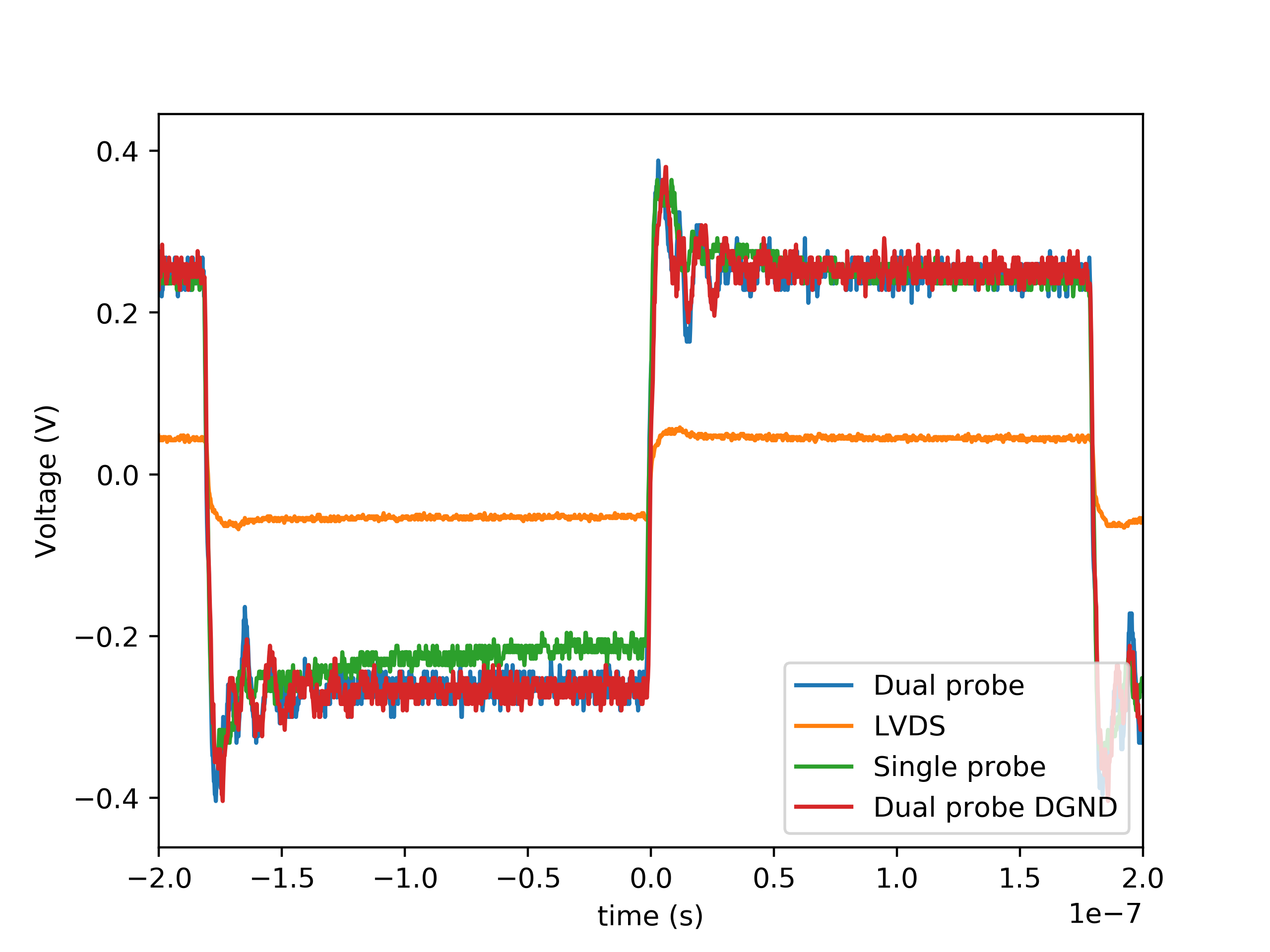 This plot is the exact same as the above now with what was previously light and dark blue recalculated as Dual Probe (first picture) and Dual Probe DGND (second picture). As can be seen there is indeed a massive difference in pulse height between the LVDS and the high Ohm probes. The different connection schemes were basically irrelevant to the dual probe measurement and even the single probe measurement is comparable to the dual probe though the negative peak seems to have a faster decay. 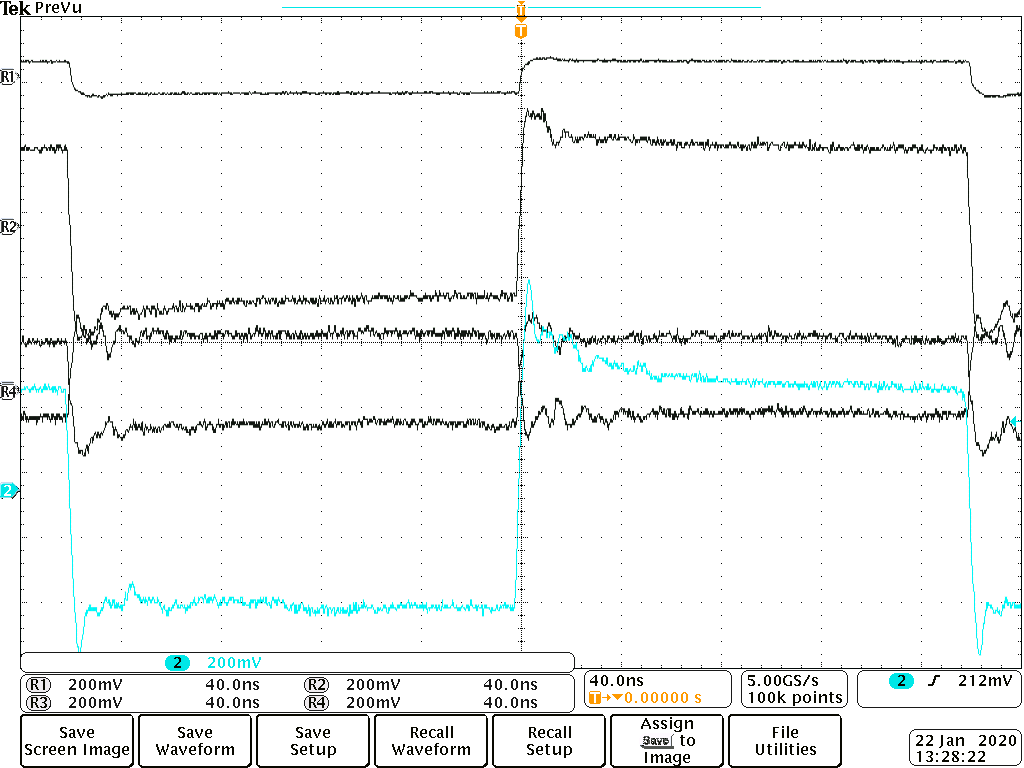 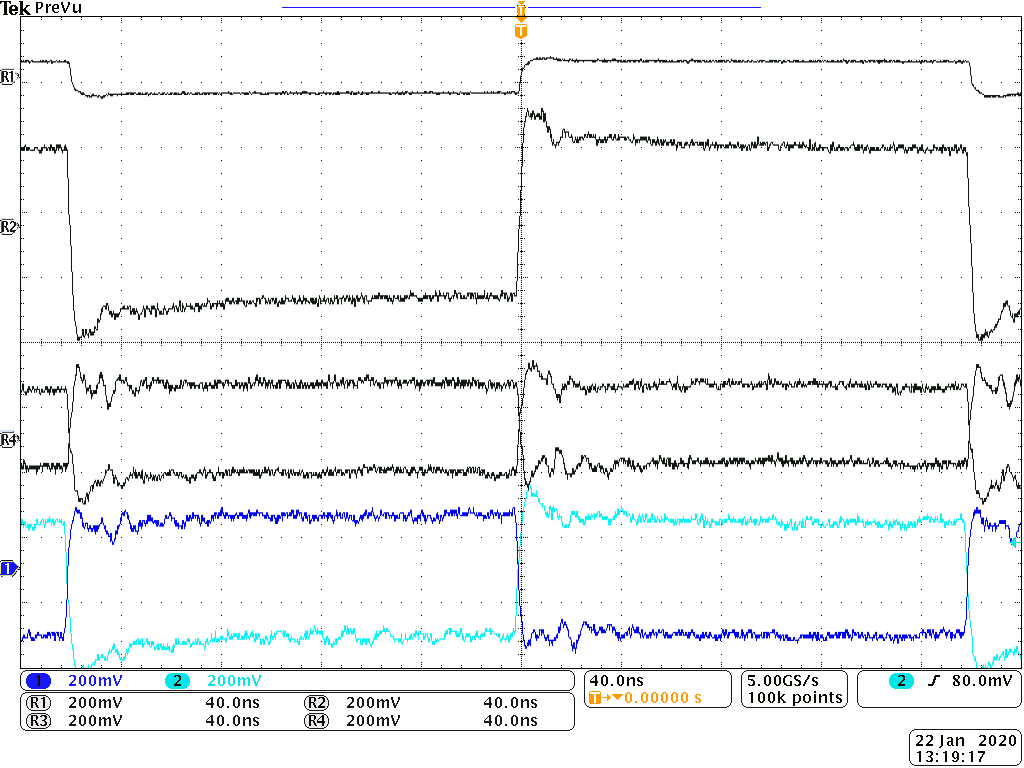 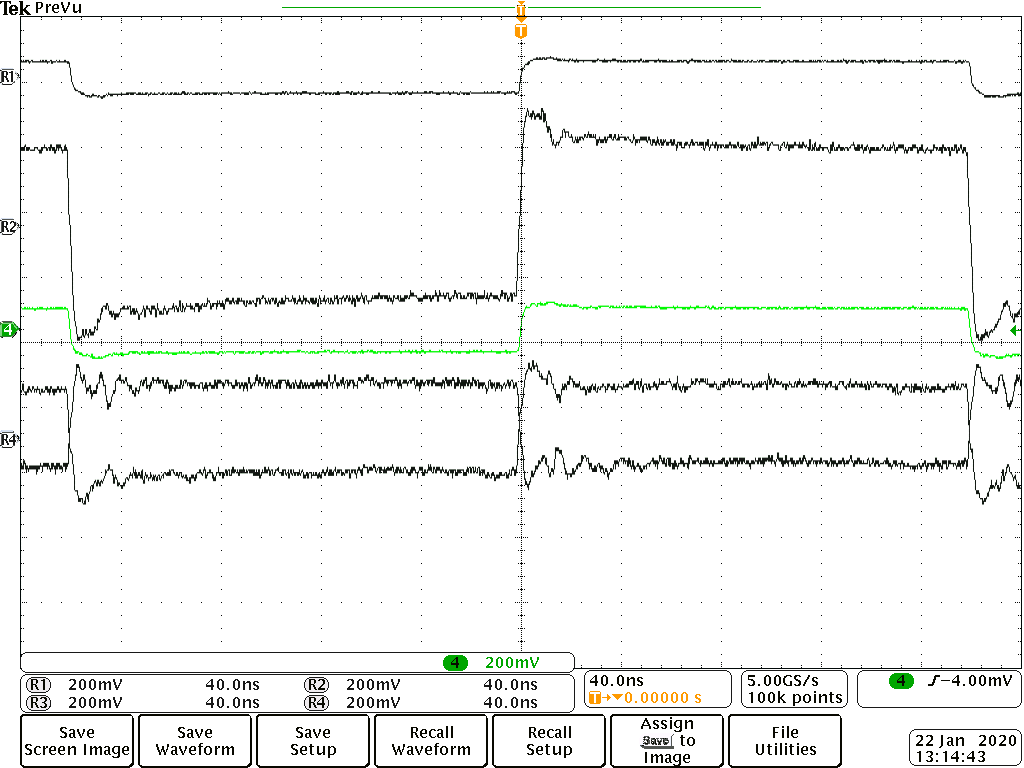 A plot showing all of the cassette measurements together is visible below. 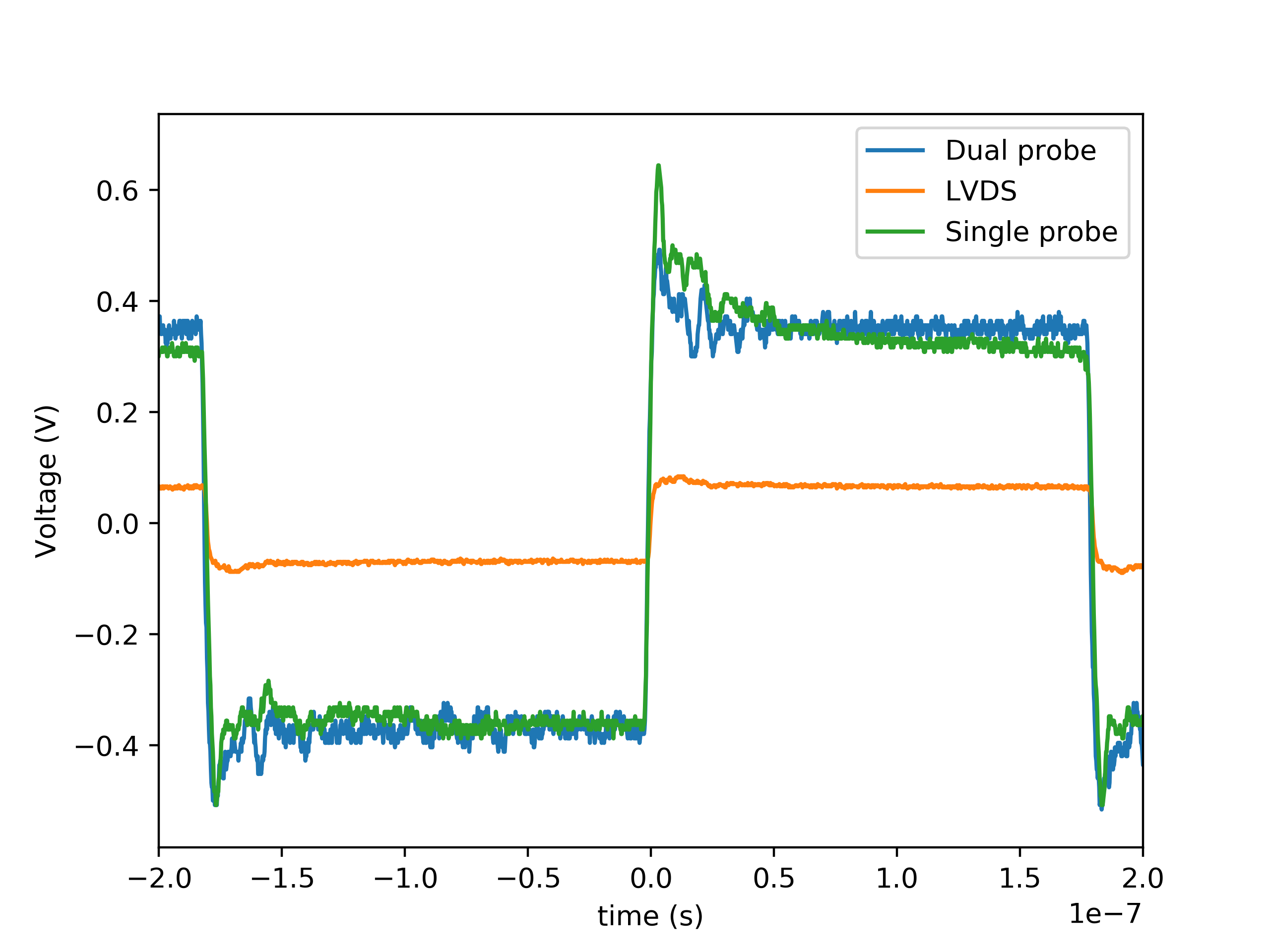 In general the measurements show similar results with the biggest difference being the larger amplitude for the cassette board measurements. In BOTH cases we see an offset to lower values except for the dual DGND case. It is unclear where it comes from and unclear whether it is important a guess from Uwe Kraemer  is "nope that is not important" as we are looking at an LVDS signal.

This means that roughly the mean difference between positive and negative values is as follows:

We are able to see mean differences of about 700 mV as shown in Bens spice simulations. Though only when measuring at R26 later at the Kapton Flex the general signal amplitude has lowered.

2020.02.12, 20 Ohm modified resistor (ERROR: RESISTOR IS ON TRIGGER PINS NOT CLOCK PINS THEREFORE OBVIOUSLY NOTHING CHANGES ON THE CLOCK SIGNAL)

The cassette board was modified by adding a 0201 20 Ohm SMD resistor on top of the Kapton Flex connector on the board between pins 34 and 36 this was an error from uwes side as those are the trigger pins not the clock pins. The pictures are still nice but no conclusions should be drawn from any measurements. 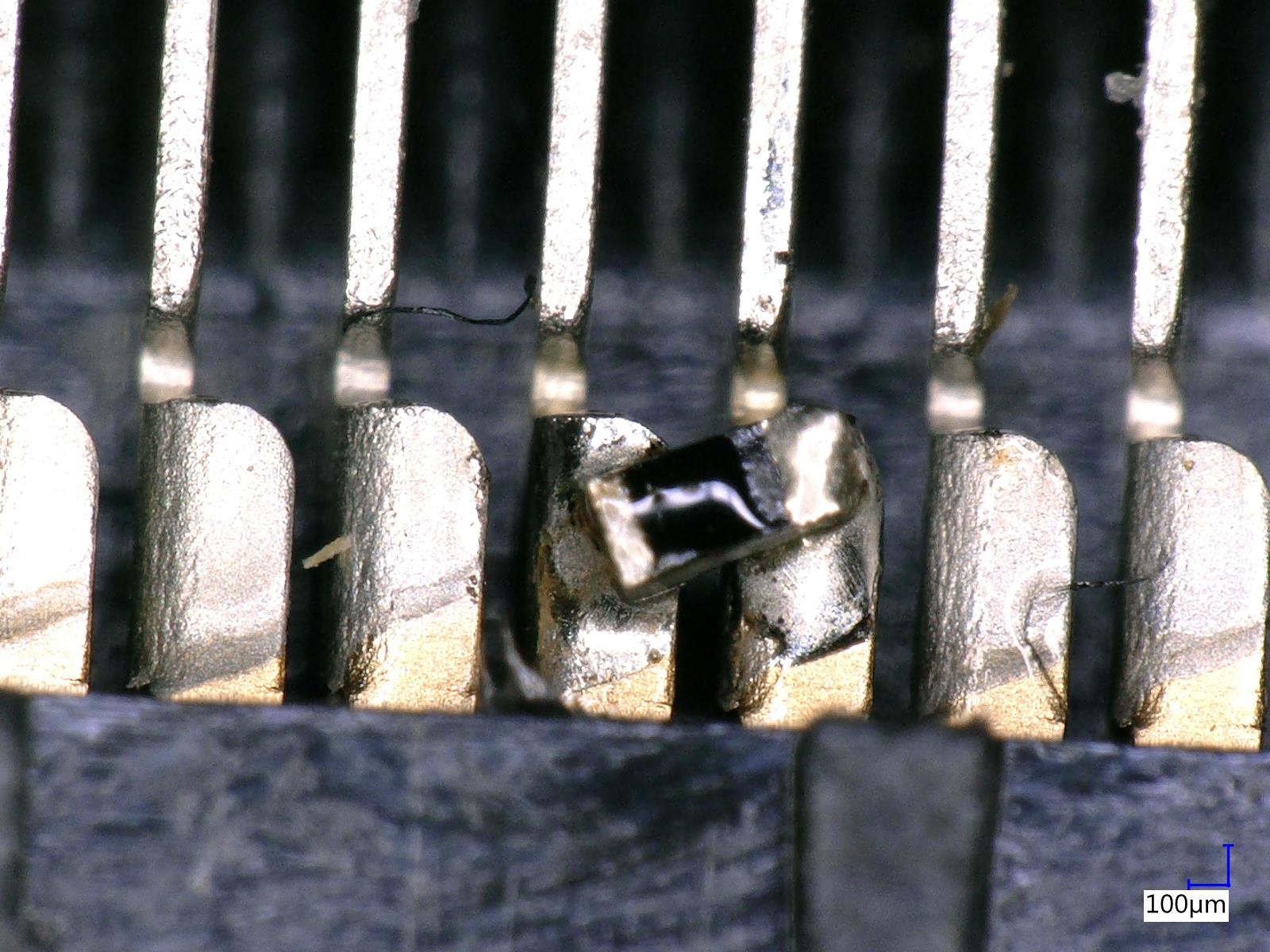 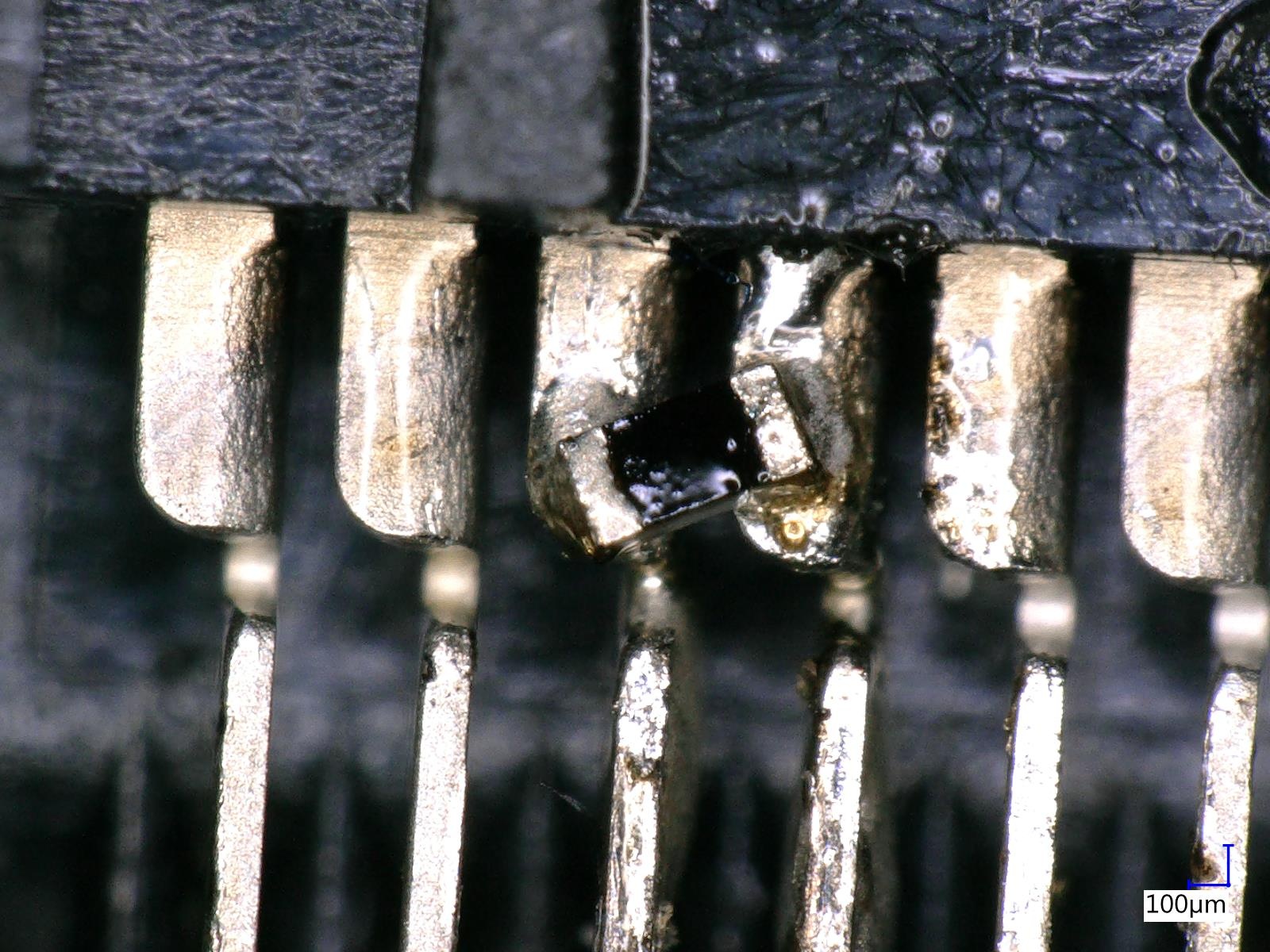 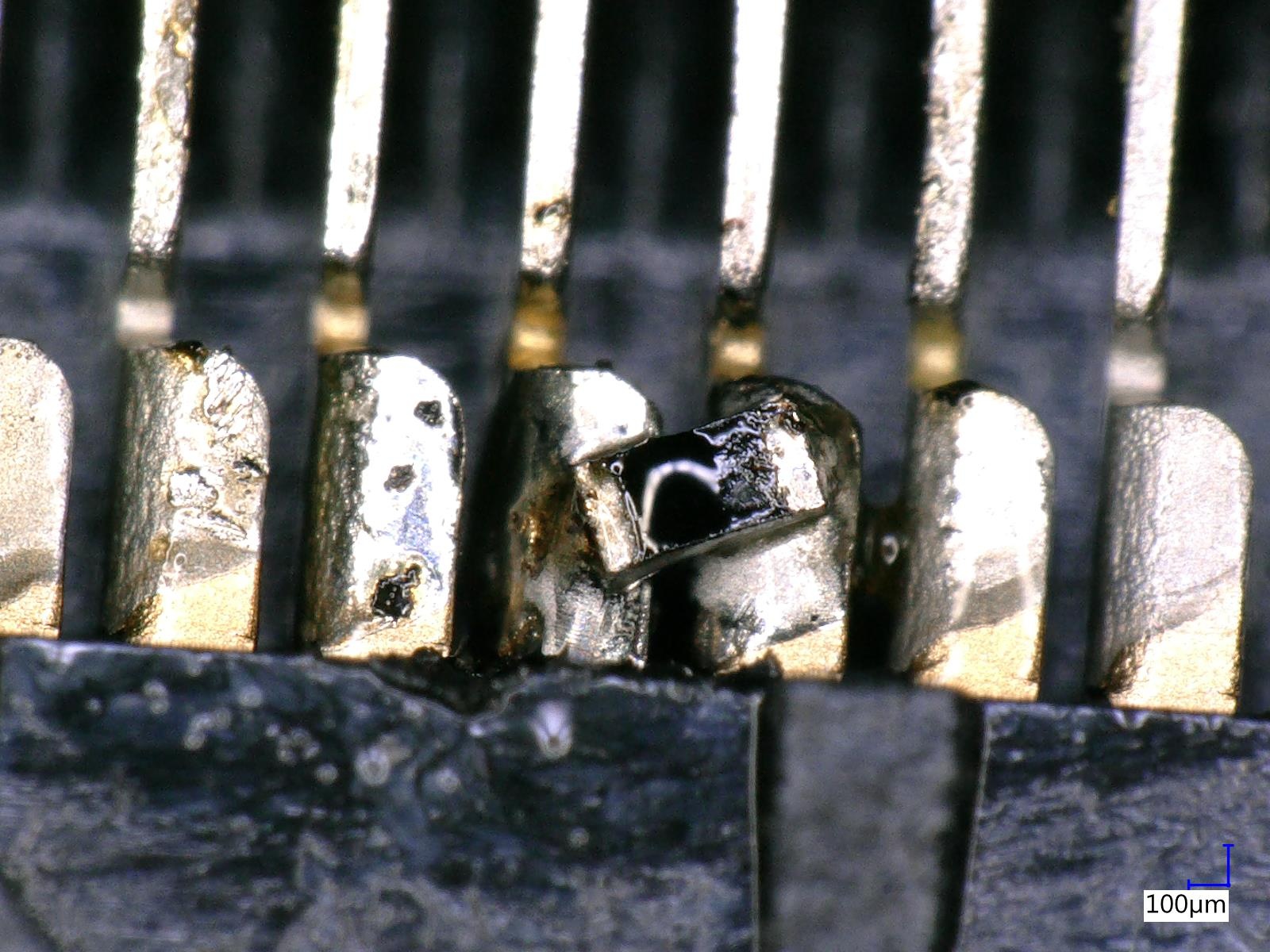 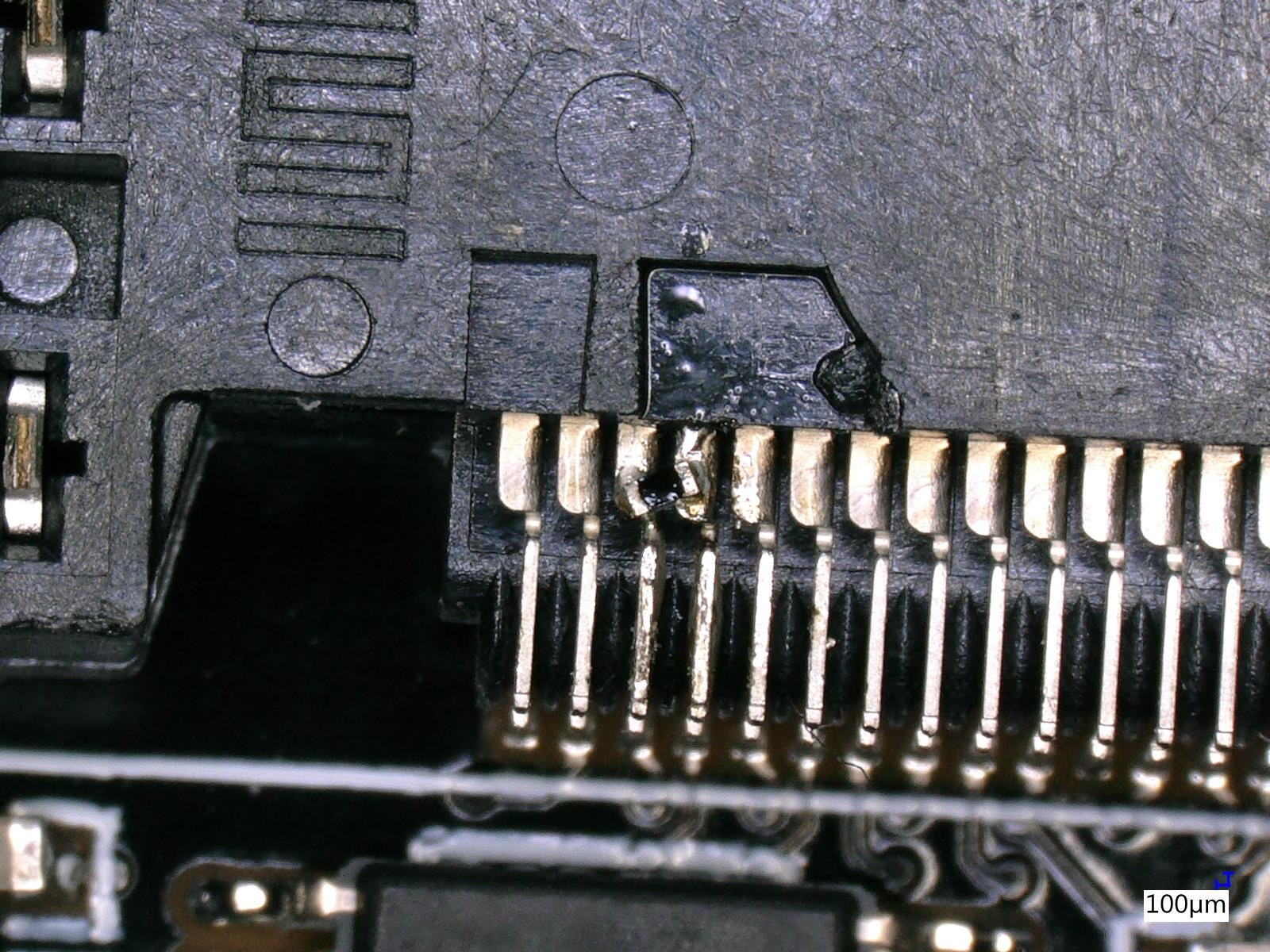 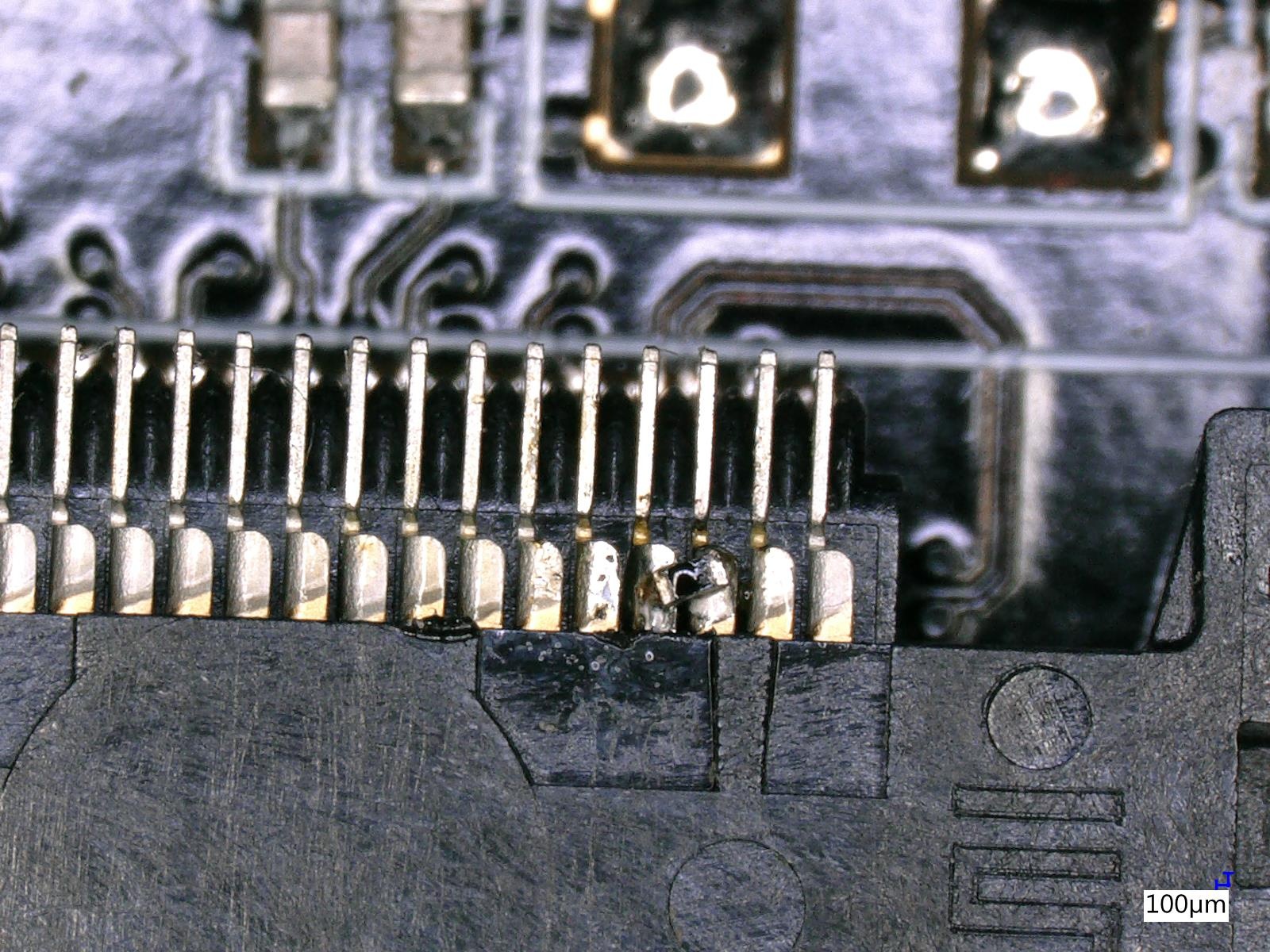 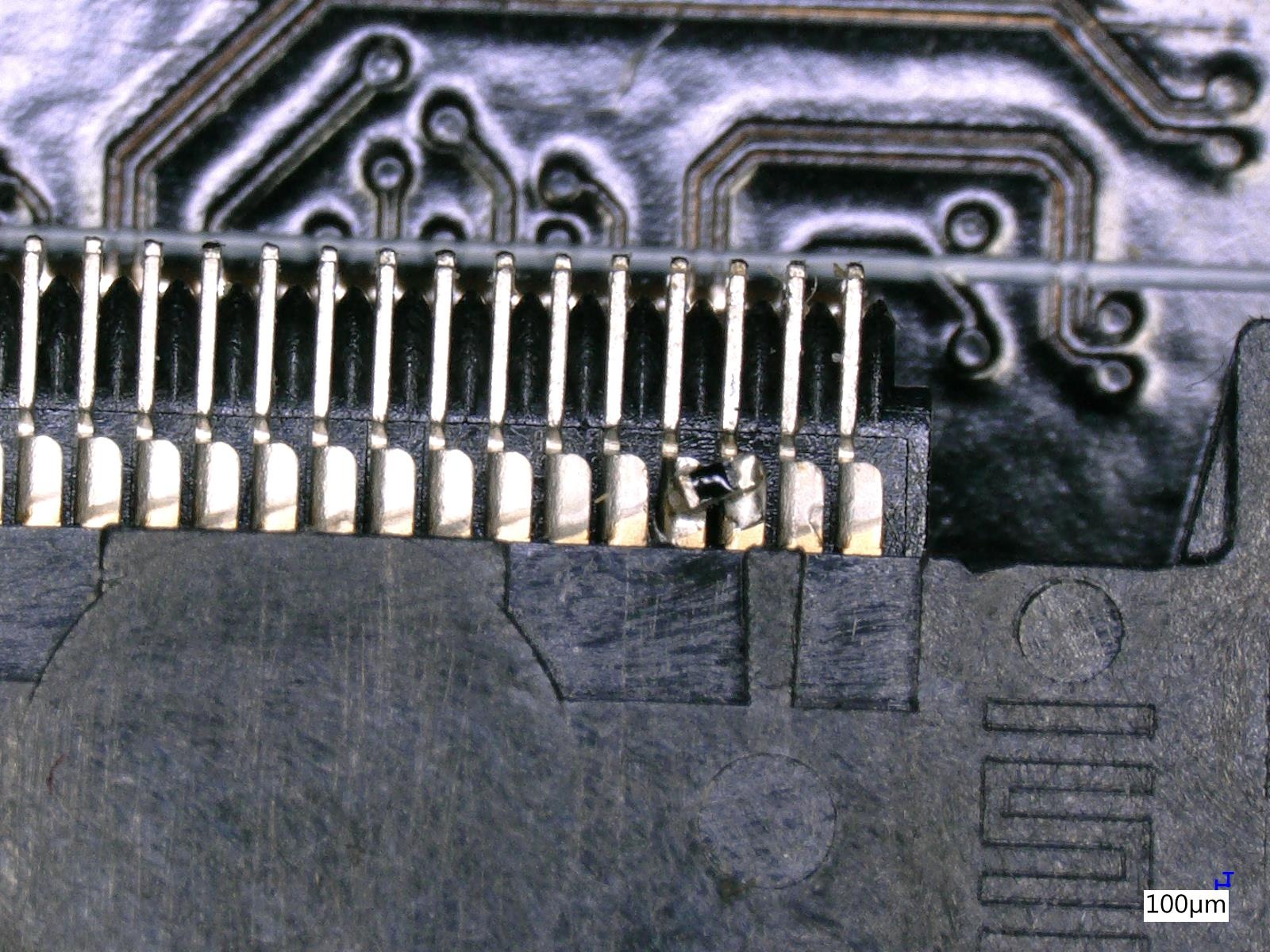