How to read Train IDs at FLASH

At FLASH photons are delivered with a special pulse structure:

Each pulse train is identified by an Train ID (synonyms: bunch ID, timestamp).

Recording this Train ID on the user side allows the correlation of data acquired by the user with all the data saved at FLASH in the DOOCS system, especially with the photon intensity data measured by the GMD system.

Within DOOCS the Train ID is a 32-bit number. For the users it is transmitted via a socket connection over ethernet - TCP socket. The ID is set 20 ms before the train starts and stays 80 ms after the train. To read the Train ID by the user there are 2 options provided by FLASH: 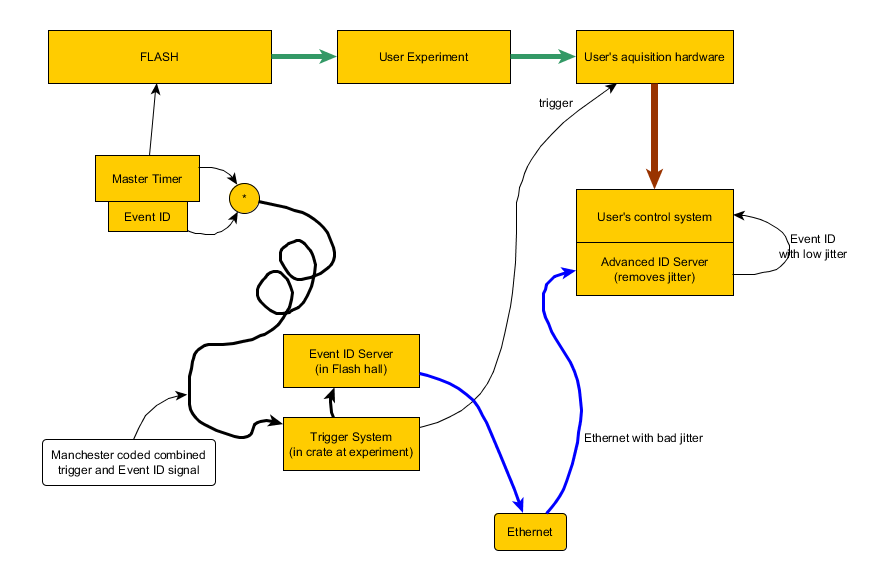 See also this sketch of the sequence with miliseconds attached to it, to see when the ID updates relative to the beam.

Note: If the central Train ID server crashes it will not resume the ID numbers where it was. In most times it will restart with ID 0, sometimes it is set to some high number by hand. For this reason you will see Train IDs with some high bit not as often as expected.

What does Advanced ID Server do?

It connects to the TCP based TIDY or TIDS server and continuously gets the Ethernet packets with the IDs. These packets are time stamped with microsecond resolution and stored. This runs all the time. Because we have a lot of data we can correlate the local time on that machine (that generated the local time stamps) and the IDs. If the Ethernet connection lags sometimes, chokes, hick ups and messes around with our packets, even drops some... Who cares. By closely monitoring all data we can define a function to calculate the Train ID from the local time on that machine.

Here it is running on Windows, but of course you can also use it on your Linux machine (build it from the source).

The users can access this server via a socket. Use localhost:58051. Connect your program to that socket and you get immediately the actual Train ID for this very moment. (e.g. in the CMD window with telnet localhost 58051 ... note:telnet is usually deactivated in win10 and has to be activated) The packet you get looks like this:

You get a new calculated ID every time you send any data to the server. So normally your program looks like this and should not close and open the socket all the time:

About the format: More abstract you get a number, dot, a second number. A character. A third and fourth number.

The char gives basic information about the state of the Advanced ID Server:

So O means no worries. S and D are warnings, if they stay for more than some seconds your timing might run off.

The third number is the statistical quality of our calculation. Interpret it like something equal to timing jitter with the unit of microseconds. You can use it to monitor your Ethernet link quality. 10000 means 10 ms, everything below will not affect anyone I assume. The last number is also a statistical jitter value.

Hint: Do NOT enable "fast shutter eventIDs" in the Train ID sender program if you intend to use the Advanced ID Server! Or use a TIDY server.

You need to specify a suitable TIDY server for your experimental location on invocation like so:

Receiving the Train ID via ethernet is rather simple. Just open a TCP socket to the one of the servers and read from it.
The returned string has the following format: YYMMDD HHMMSS.mmm EVENTID

The following machines can be used:

Please see also the sample code for C and LabView 14. Example how to embed the ethernet Train ID code into your Labview project (LV 8.6): BunchID-inline.vi. We have also C++ code which can be used to be integrate into existing projects.

The Train-ID for the train is set ~ 20 ms (for TIDS) before the first photon pulse (at the same time as event 20 or E0) Note the timing differences between TIDS and TIDY in the following sections.

To validate the connection telnet can be used:

You receive for example:

This format probably is:

where %y are the last two digits of the year, %m month, %d day number, %H the hour of the day counting from 0 to 23, %M minutes, %S seconds, %3N milliseconds, %X the pulse ID in hexadecimal notation. So it is the last column which is the relevant Train ID.

The time and date have leading zeros as necessary to ensure a constant field width. The ID number is not zero padded and thus has a varying field width.

Do not enable "fast shutter eventIDs" if you want to use the Advanced ID Server. 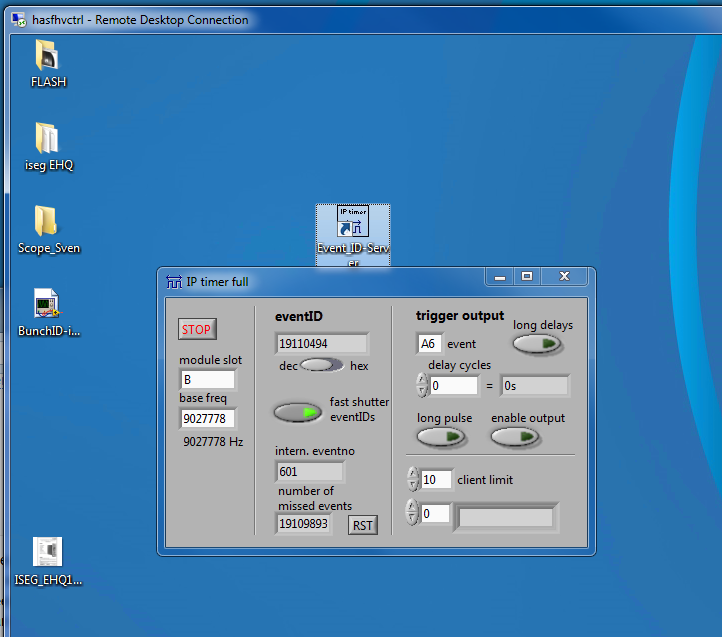 As alternative to the Train ID sender you can use this server. These are the differences:

Note that the TIDY server is especially good for use together with AIDS, as there is no interaction with the fast shutter (which would break AIDS), and the rather late update to new IDs is of no consequence, as you get the IDs as floats anyhow. So the recommodation is to use TIDY together with AIDS and whenever you can, and use TIDS only if you need the fast shutter functionality.