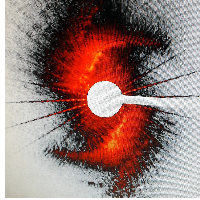 HowTo: Alignment of in – and off-plane reflexes

4)        In order to find the reflection, one has to scan ‘omega’ in a reasonable angular range with a step matching the expected width of the rocking curve; normally the reflection is found after scanning ‘omega’ within ±0.1° and a step of 0.001°. 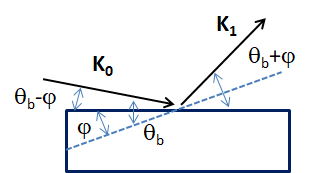 For a cubic lattice the angle j between two planes having Miller indexes h1k1l1 and h2k2l2 is defined as:

After the measurable reflection is selected, the steps 1) and 2) should be applied. As before, in step 3) the detector arm has to be places at d0+2qb. But the ‘omega’ circle should be positioned either at qb-j or at qb+j (see Figure 1). The case of incident angle equal to qb-j is favourable since the intrinsic width is becoming larger due to asymmetry factor; and hence the reflection will be easier to find. After the ‘delta’ and ‘omega’ circles are brought to their positions, one has to start azimuthal scans of the sample using the ‘phi’ circle. Scanning of ‘phi’ motor should be performed in a wide angular range of 180° with reasonably small step of 0.01°.  After the reflection is found, one can measure its rocking curve by scanning ‘omega’ as in step 4). 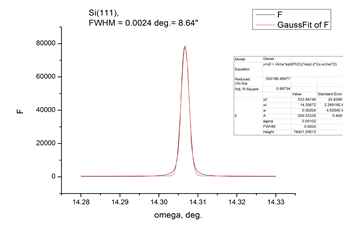 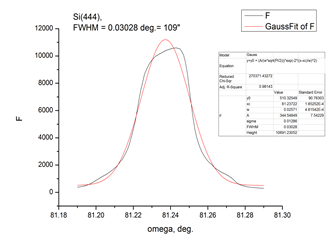