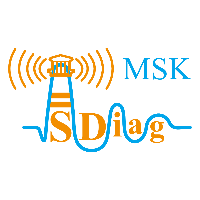 Description of the data structure provided by the Bunch Arrival-time Monitors (BAM). The arrival-time information can be used for post-sorting and jitter correction of experimental data.

Article is intended for users of the FEL facilities.

The Bunch Arrival-time monitor uses a relative measurement method which compares the timing of each electron bunch against a laser pulse provided by the optical reference system (LbSync); to the same time reference, the pump-probe lasers are phase-locked.

The unit of the BAM data are picoseconds.

The x-axis is given in microseconds, showing the bunch filling pattern as defined in the main timing system.

The actual time t0 = 0ps is an arbitrary offset which is only changed after setting up the system after, e.g., a maintenance time, and has no relevance.

What one usually does, after defining/finding time zero in the experiment, is either observe the relative changes for a single bunch during the course of the measurement run compared to the starting point,

or (in addition) observe the relative deviation across all bunches within the same bunch train.

Those deviations and drifts happen usually only in the order of 50fs to 200fs; depending on the machine setup.

The short-term timing jitter (over several 100 trains) for each individual bunch, i.e. the standard deviation from their mean value, is usually ~ 20fs.

The actual measurement resolution of a BAM can be - currently - as good as 3fs, for each bunch in the full train.

The array lengths and fill patterns depend on which source one is choosing when reading the BAM data.

The original DOOCS property of the bunch pattern table has an array length of 7222 entries, and is filled in a 9MHz pattern.

The original DOOCS property of the BAM data has an array length of 7222 entries, and is filled in a 9MHz pattern.

This is the array one will get when pulling the DOOCS property (e.g.) ‘XFEL.SDIAG/BAM/1932M.TL/LOW_CHARGE_ARRIVAL_TIME’ directly from the BAM front-end CPU via RPC.

The same data is also published in a ZMQ channel with according name.

I.e., the BAM DAQ channel ‘XFEL.SDIAG/BAM.DAQ/1932M.TL.LOW_CHARGE_ARRIVAL_TIME’ has an array length of only 3611 entries.

I.e., this data array is effectively filled in a 4.5MHz pattern.

When extracting data from the DAQ, it is provided in hdf5 format. Contact V.Rybnikov (MCS) for support.

The data files are stored (on request) on a local disk of one of the DAQ computers. The data directory of that computer is nfs mounted on computers xfeluser1/2 resp. flashuser1/2.

You need the information from the bunch pattern table, which indices the user bunches had.

Usually only of interest for users are following channels:

For converting to binary word with 12bits to display status bits/logic plot.