After the clustering-1 step

Histograms to define the cuts, e.g. TDCCut(Min and Max), SeedSNRCut and NeighborSNRCut, were added to the clustering-1 step (to the src executable AlibavaSeedClustering.cc). An example of the relevant distr is presented below as a comparison between the corresponding values distributions for a run from each, june and oct. 2015, data samples with the following cut set:

Two pairs of plots above show the ditrs. for noise basically, since no cuts were imposed and because SNR of the signals accumulated with alibava is rather bad. Thus no extra peaks except for the peak around SNR = 1 (corresponds to the noise, i.e. most of the signal is nothing but noise). Otherwise we'd have observed extra peak(s) around SNR > 1.0. This was observed from the data from June15 taken from a non-irr sample of FTh200P. 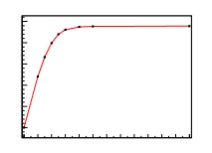 Clu3. Fraction of DUT ch. excluded from clustering by the SNRCut. Exclusion condition: SNR of a ch. is less than NeighbourSNRCut.

The fraction is ~50% when no cut was set is related to alternating of the signal distr. among the ch. This is related to the symmetry of the noise charge distr. around 0 and to the fact that the desired signal is low compared to the noise lvl.

After the merger step

Checking the clustering efficiency after performing the merging step (with the use of git ver. code) with the following parameters: 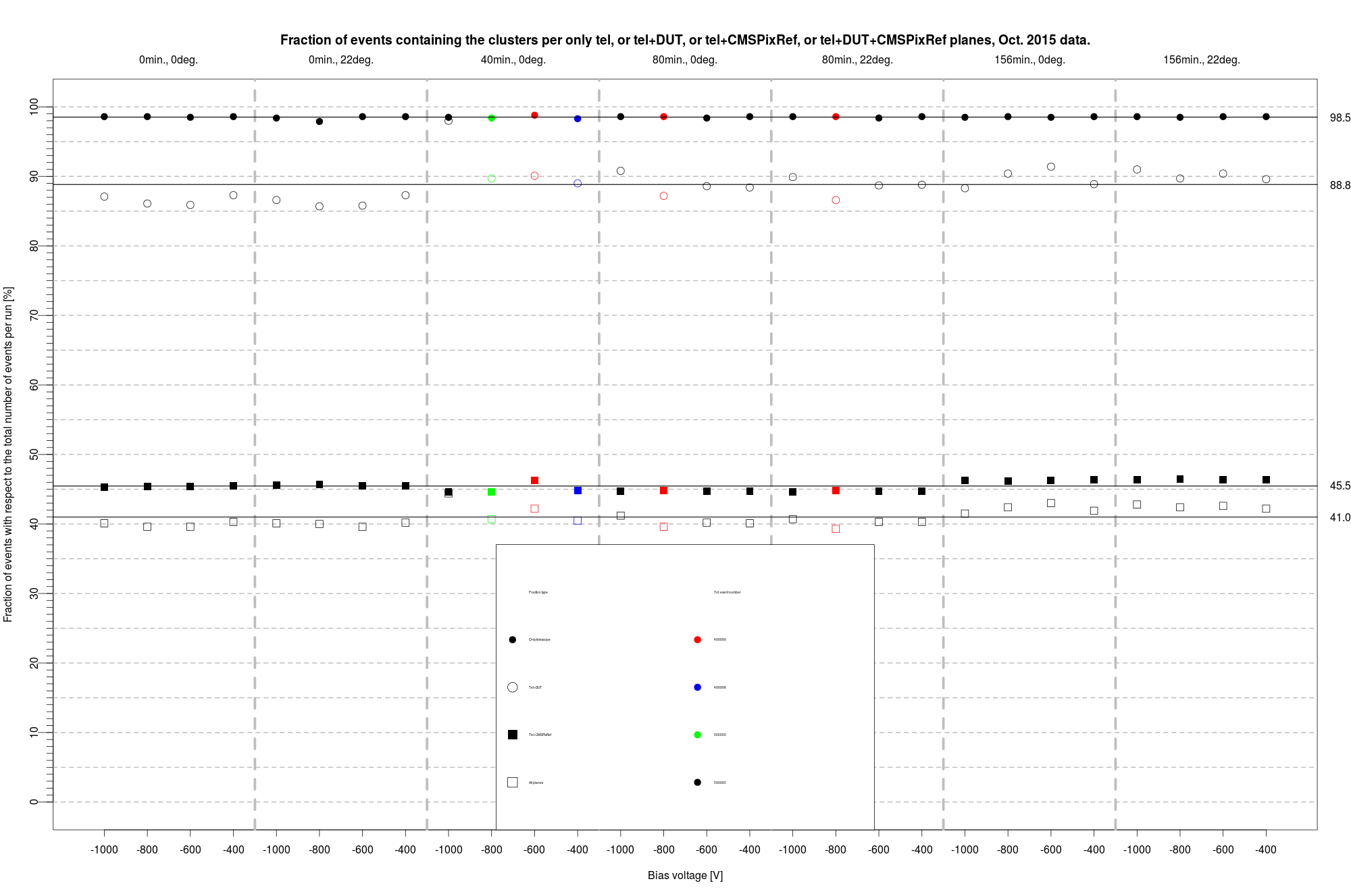 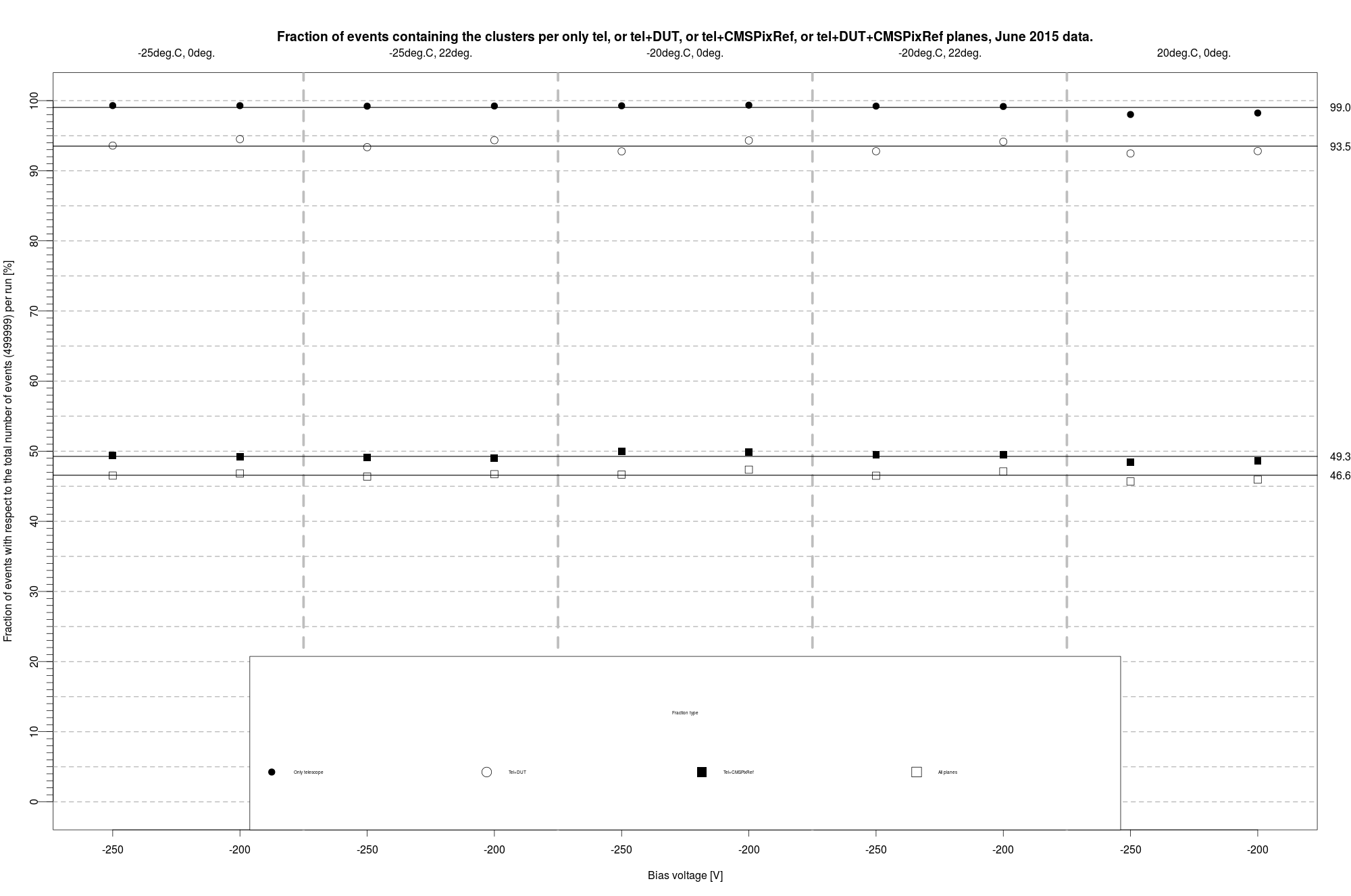 Fig. 1. Fractions (with respect to the total numb. of the run's events) of the events /aka clustering efficiency/ where clusters were found on

Plot on the right is for comparison, it presents a summary of the June 2015 data

Fig. 1 shows that the fraction of events when the clusters were found on each plane of the telescope including DUT and CMSPixRef lays between 39 and 43 %. That is about 0.9 (see fig. 2) of the CMSPixRef acceptance (it was about 45-50%), which means that the fine tunning of the cuts is required in order to match the timing between the DAQ instance of DUT and CMSPixRef. 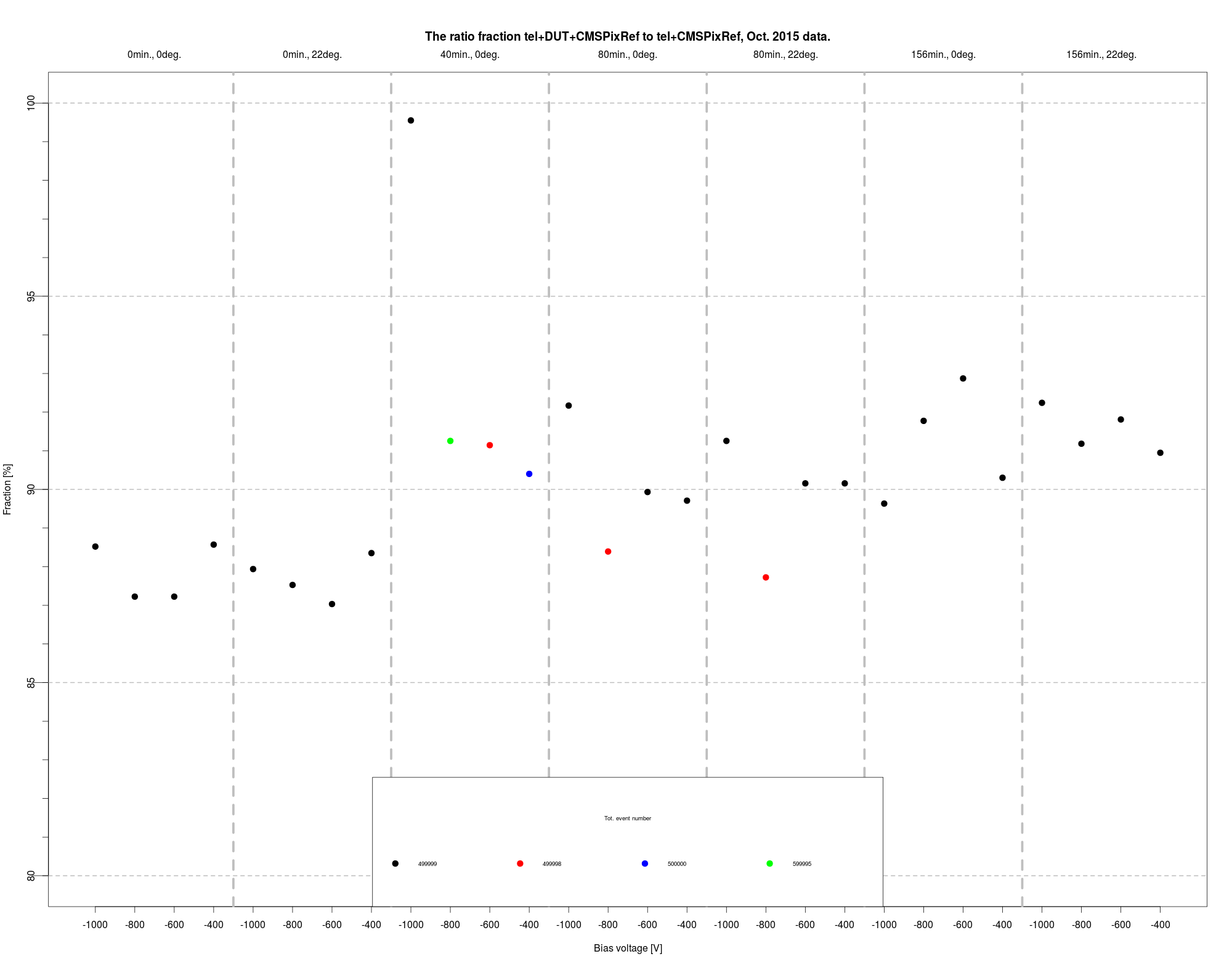 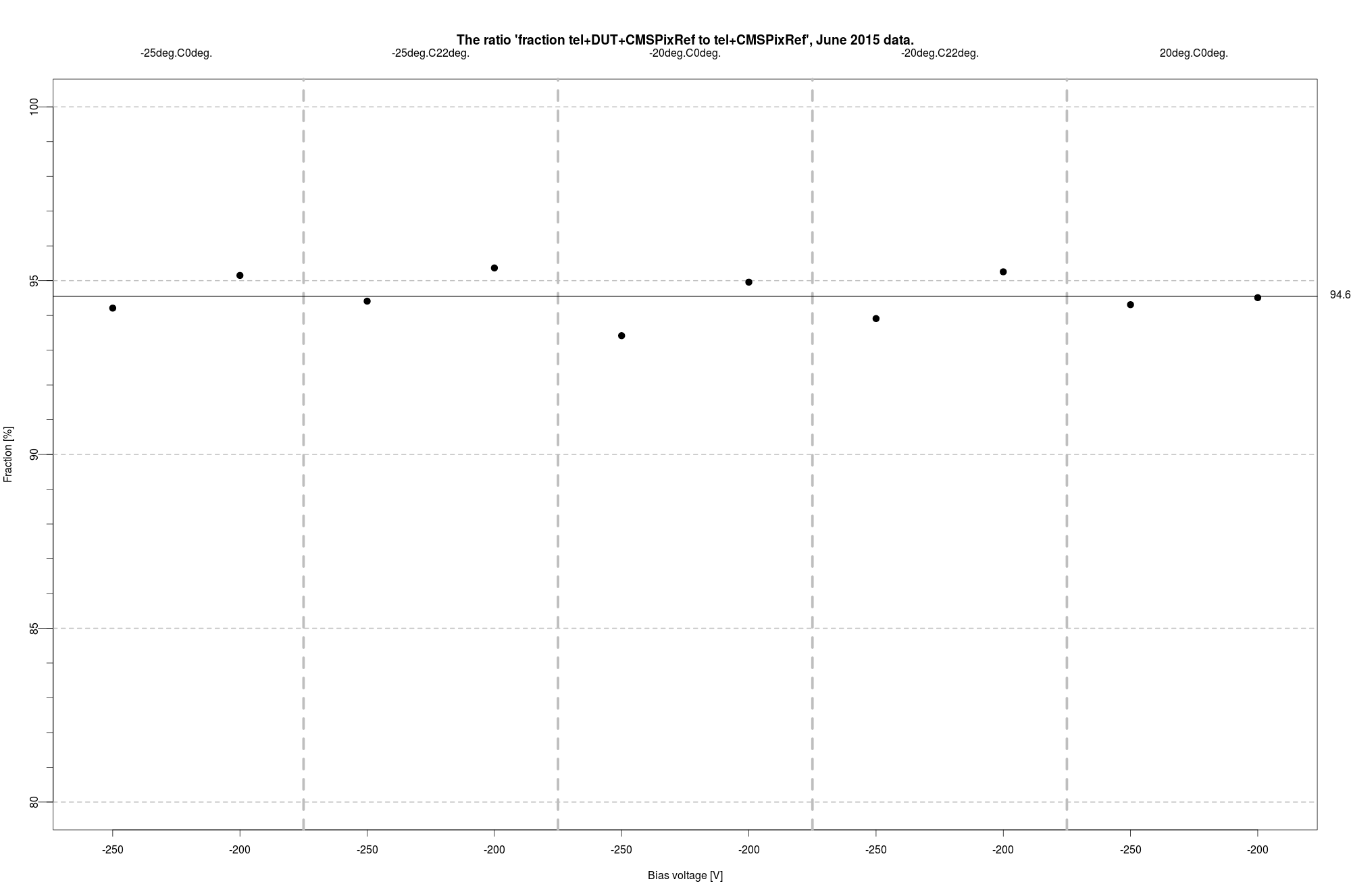 Fig. 2. Ratio between the clustering efficiencies

in the case where clusters were found on each plane and on the telescope+CMSPixRef planes.

Fig. 1 also points out to the fact that some of the events data were lost (usually, "cluster_m26" or "original_zddata" collections are missing in there events), the fraction of such events is shown on fig. 3. 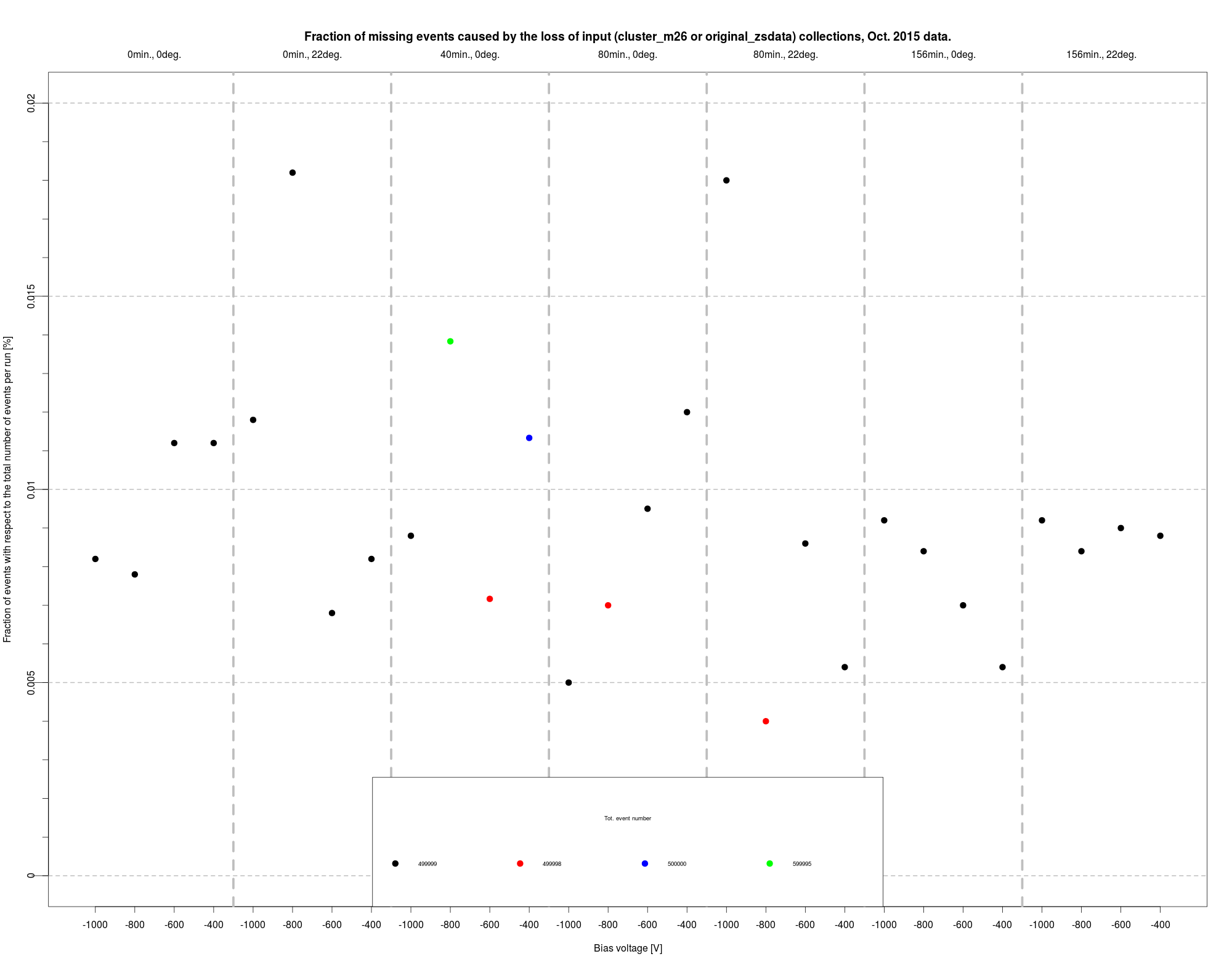 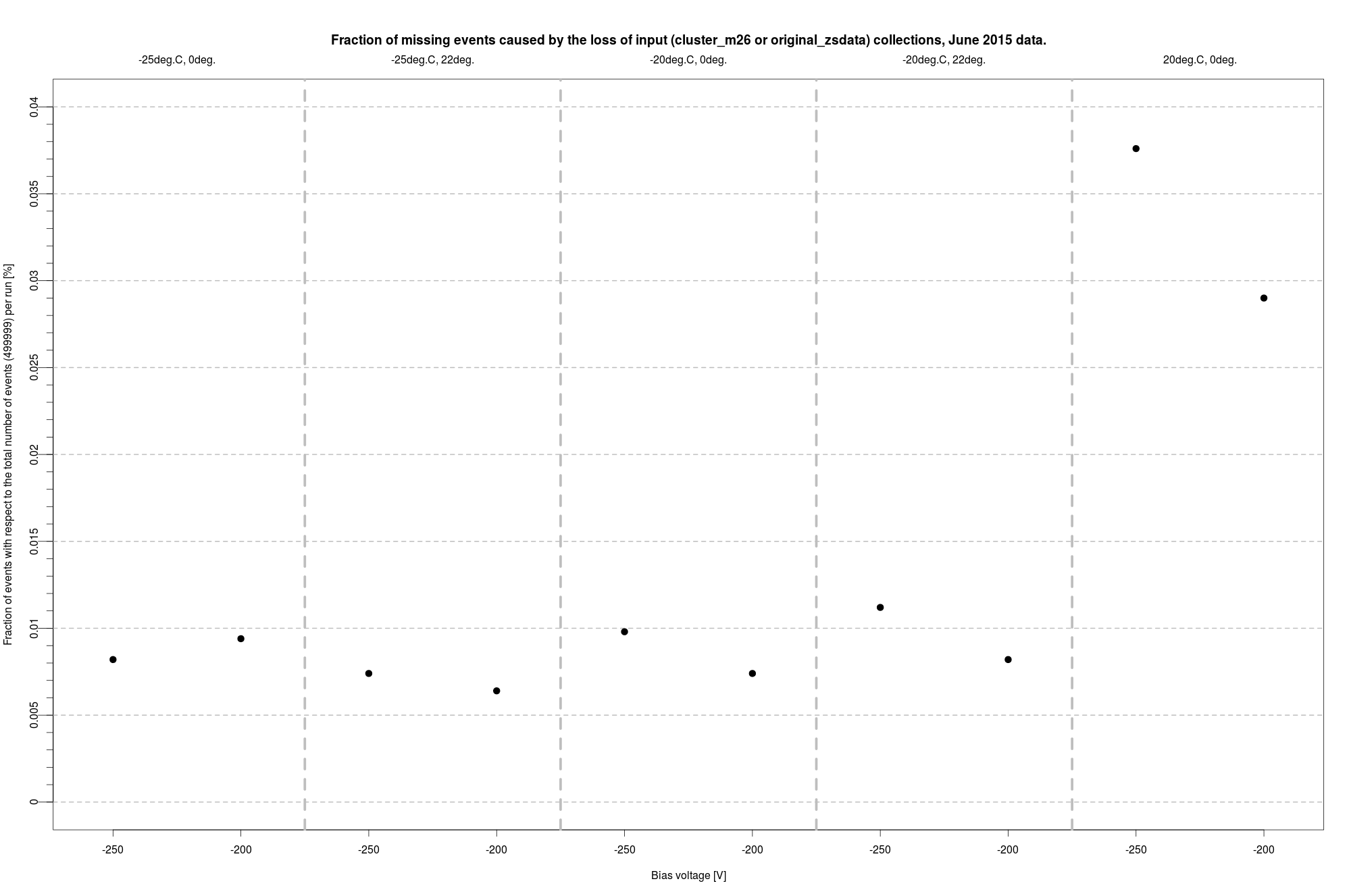 Fig. 3. DQM: the fraction of events not containing the input data collection(s).

Previously the clustering efficiency when in the case of clusters finding on each plane was observed to be less than 5%. That was the consequence of the wrong TDC and SNR cuts settings application; they were equal to:

These settings were suitable for the data obtained during the June15's TB when a non-irradiated FTH200p was used as DUT, thus they've been (stupidlyblindly) initially set for the analysis of the Oct15 TB data.

The correlation plots between the clusters ditr. on the telescope planes vs. corresponding distr. on the DUT and CMSPixRef planes are presented here. Correlations plotting was introduced to the merger step (AlibavaClusterCollectionMerger.cc code). 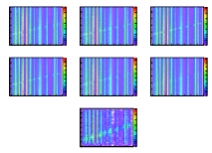 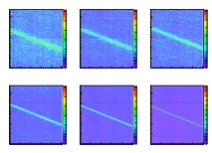 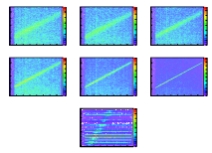