Fast Radio Bursts (FRBs) are transient sources that emit a single radio pulse with a duration of only a few milliseconds. They were firstly discovered ten years ago, and nowadays we have detected large number of these events using radio facilities. However, their physical origin remains completely unknown. The observed dispersion measures in the bursts suggest cosmological distances, thus making these events unexpectedly bright. Multiple scenarios have been proposed during these years: from cataclysmic events, as compact binary mergers or gamma-ray bursts, to super-giant pulses or magnetars. Several of these scenarios predict a multiwavelength emission, potentially observable at optical, X-rays, and gamma-rays.The detection of multiple bursts in a few FRBs excluded all the cataclysmic scenarios, at least for these particular FRBs (the existence of two possible types of FRBs still remains plausible). So far there is only one precise localization of a FRB, the first known repeater: FRB 121102. This localization showed that the bursts are associated to a compact and persistent radio source with a size < 0.7 pc. This source is located within a star-forming region in a low-metallicity dwarf galaxy at a redshift z ~ 0.19. This environment resembles the ones where superluminous supernovae or long-duration gamma-ray bursts are produced. However, there are also similarities with the magnetars located in the Galactic Center, close to Sgr A*. The nature of this persistent source and the origin of the bursts remain unknown, although a neutron star/magnetar energizing a young superluminous supernova, or a system hosting a massive black hole, are the most plausible scenarios to date. Simultaneous gamma-ray, X-ray, optical and radio observations provided constraints on the emission at high energies. The existence of a large sample of these events and more precise localizations are critical to understand the origin of FRBs in the near future. 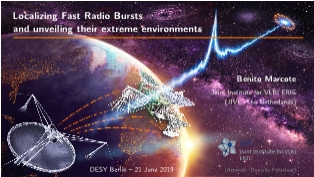