Semiletptonic B decays constitute a very important part of the Belle II physics program. In this analysis the B^0 → D^- \ell^+ \nu and B^0 → D^{*-} \ell^+ \nu decays are reconstructed. The former channel (more difficult as the latter constitutes a significant source of background) has been observed for the first time at Belle II.

For the B^0 → D^{*-} \ell^+ \nu channel, we also perform a measurement of its branching ratio, which we determine to be \mathcal{B}(B^0 \rightarrow D^{*-} \ell^+ \nu) = (4.60 \pm 0.05 \pm 0.17 \pm 045 ) %, where the first reported uncertainty is the statistical one, the second is systematic, and the third is due to the uncertainty on the slow pion (from the D^{*-} \rightarrow \overline{D}^0 \pi^-_s decay) tracking efficiency. The latter uncertainty is determined by the small size of the control sample utilized to measure the slow pion tracking efficiency, and it is expected to decrease substantially in the near future.

We also measure the partial branching ratios in bins of the recoil parameter w, and compare the results to the predictions of the Boyd, Grinstein, Lebed (BGL) model. The results are displayed in the figure below (on the left for the electronic channel, on the right for the muonic). We observed good agreement between our measurements and the expectations.

One of the great advantages of performing B physics analyses at an e^+ e^- collider consists in the fact that exactly a B\overline{B}  pair is produced in the event. We can thus reconstruct (tag) one of the B mesons, and be sure that all the other charged and neutral particles in the event originate from the other B in the event. The tagging technique comes with a strong reduction in the available statistics (less than 1% of the events have a good high-purity tag B), but allows great control of the backgrounds, especially in modes with neutrinos in the final states, such as B → D^* \tau \nu and B → \tau \nu.

At Belle II, we continued on the path opened by the first generation of B-factory experiments and developed a new, more sophisticated and powerful tool: the Full Event Interpretation (FEI), performing a hierarchical reconstruction of exclusive B meson decay chains, combining a large number of multivariate classifiers. For each tag B candidate, the classifier Ptag is evaluated; this can be used to increase the purity of the selected sample and optimize the sensitivity of each analysis. 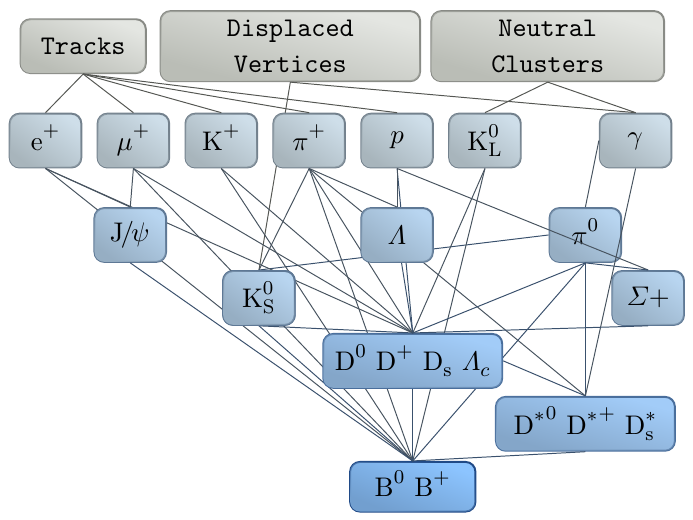 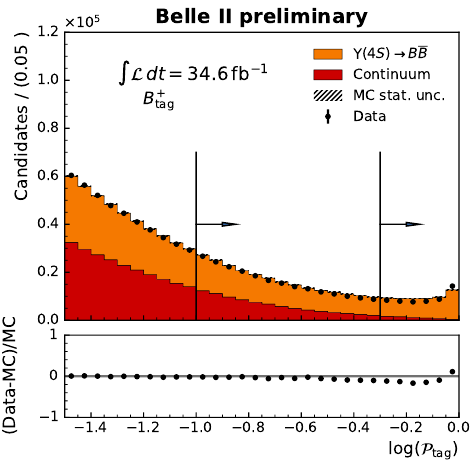 In this contribution we measure the performance of hadronic reconstruction of tag B candidates selected by the FEI, and compare it to the results obtained in the simulation. This is a fundamental step for the usage of FEI in a number of important analyses at Belle II.

The Full Event Interpretation (FEI) technique can be used to measure the magnitude of the CKM matrix element Vcb by analizing the properties of the hadronic system Xc produced by the hadronization of the c quark in the semileptonic B → X_c \ell^+ \nu decays. One of the two B mesons is fully reconstructed in a hadronic final state, and a high momentum lepton (electron or muon) is selected. All the remaining charged and neutral particles are associated to the Xc hadronic system, and the hadronic mass moments \langle M^n_X \rangle are calculated, from the calibrated mass MX of the Xc system. 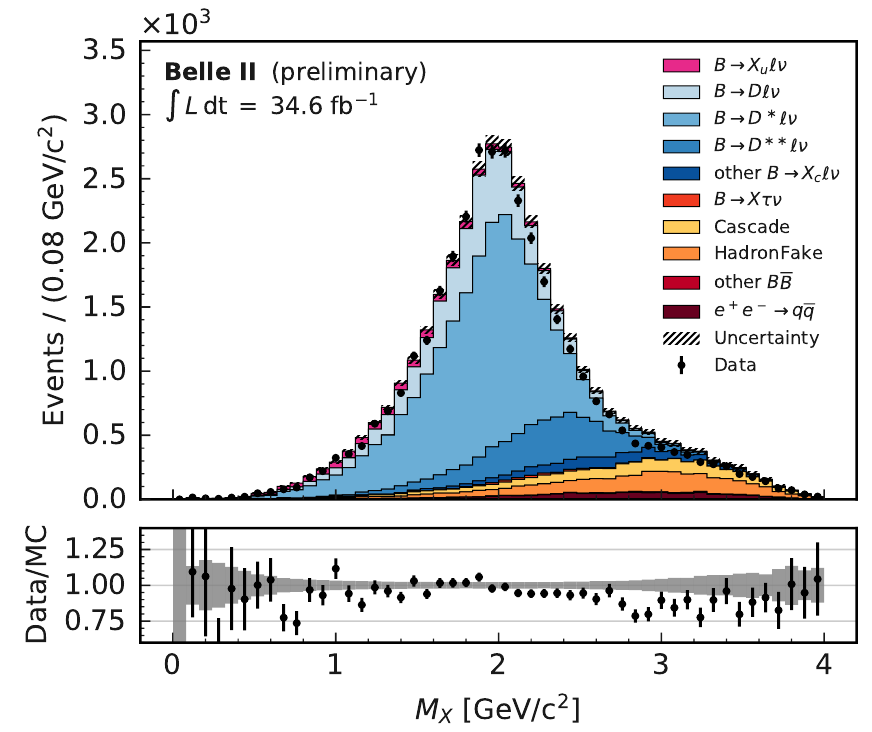 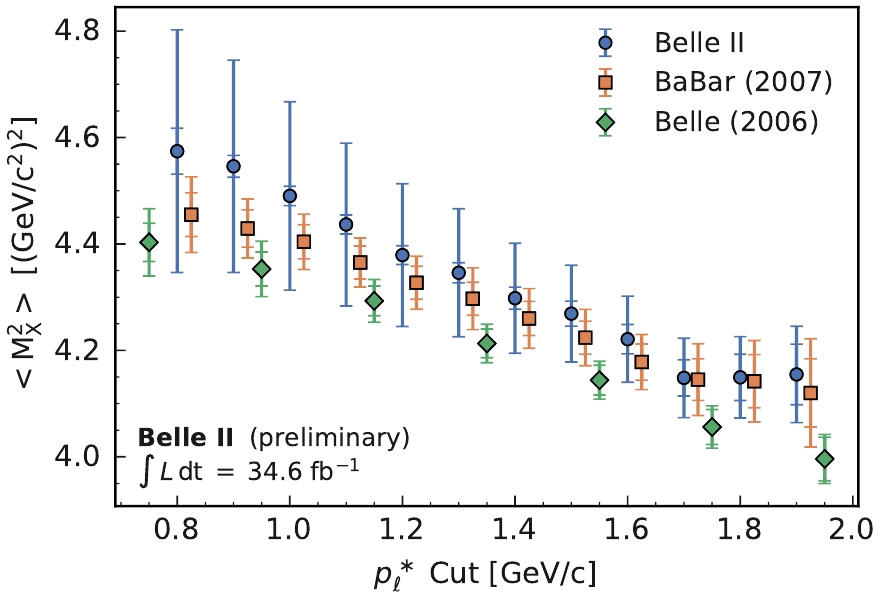 We compare the measured hadronic moments, as a function of the lower cut on the lepton momentum, with those measured by the BaBar and Belle experiments. The results from Belle II, although not yet competitive in terms of statistical precision, are in good agreement with the results of the previous experiments.

Another measurement of the branching ratio of B^0 → D^{*-} \ell^+ \nu  is performed on the recoil of fully reconstructed hadronic B decays, selected using the Full Event Interpretation (FEI) tool. The search for the signal decay is performed using the charged tracks and neutral clusters in the event that are not associated to the FEI candidate. In this analysis, the D^{*-}  meson decays to \overline{D}^0 and a slow \pi^-_s pion, with the former decaying to a K^+ \pi^- pair.  The signal is extracted with a fit to the neutrino-mass squared distribution, where signal events peak at 0 GeV2/c4 (corresponding to the invariant mass of the neutrino, which leaves no traces in the Belle II detector). The resulting branching fraction is found to be consistent with the World Average. This validates the Belle II data production chain, the reconstruction software, and the FEI tagging technique. The following figure shows the neutrino-mass squared distribution obtained in the final fit, which shows the level of purity obtainable with the FEI technique. 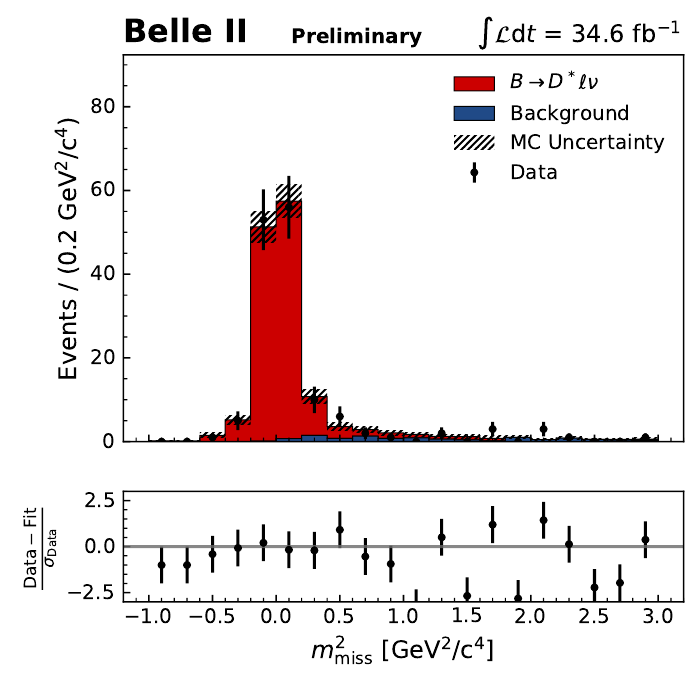 Furthermore, to exhibit the performance of the Belle II detector, the extra energy, EECL, in a fully reconstructed B^0 → D^{*-} \ell^+ \nu event is examined. EECL is defined as the sum energy of all neutral energy deposits in the Belle II calorimeter not associated with the FEI candidate or the decay daughters of the signal B meson.  A multi-variate Boosted Decision Tree (BDT) classifier is trained using cluster shower shape variables to separate clusters resulting from photon interactions from clusters resulting from beam background interactions. After applying a cut on the trained BDT, the resulting distribution shows a peak at 0 for properly reconstructed B^0 → D^{*-} \ell^+ \nu events, as is expected. 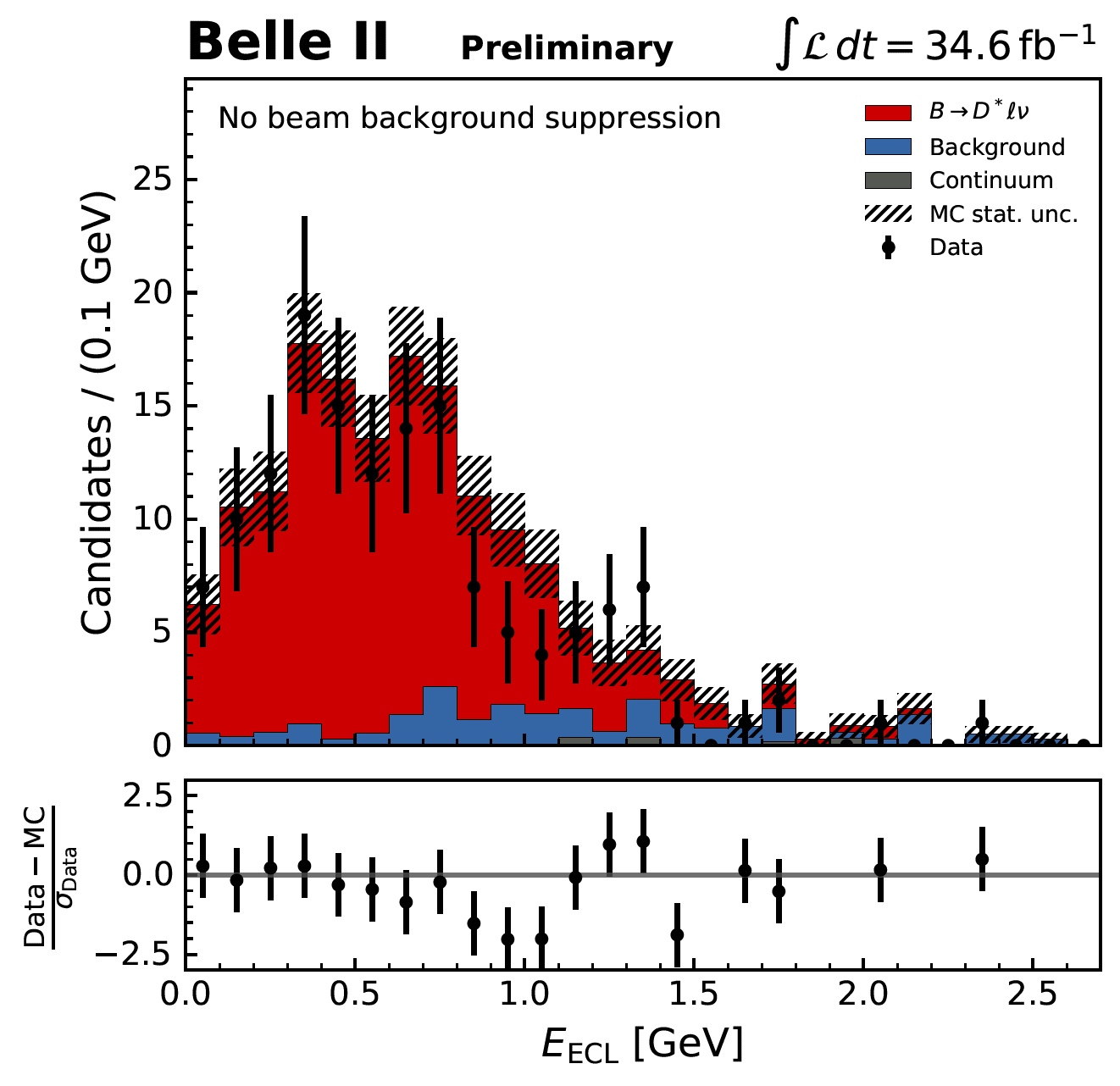 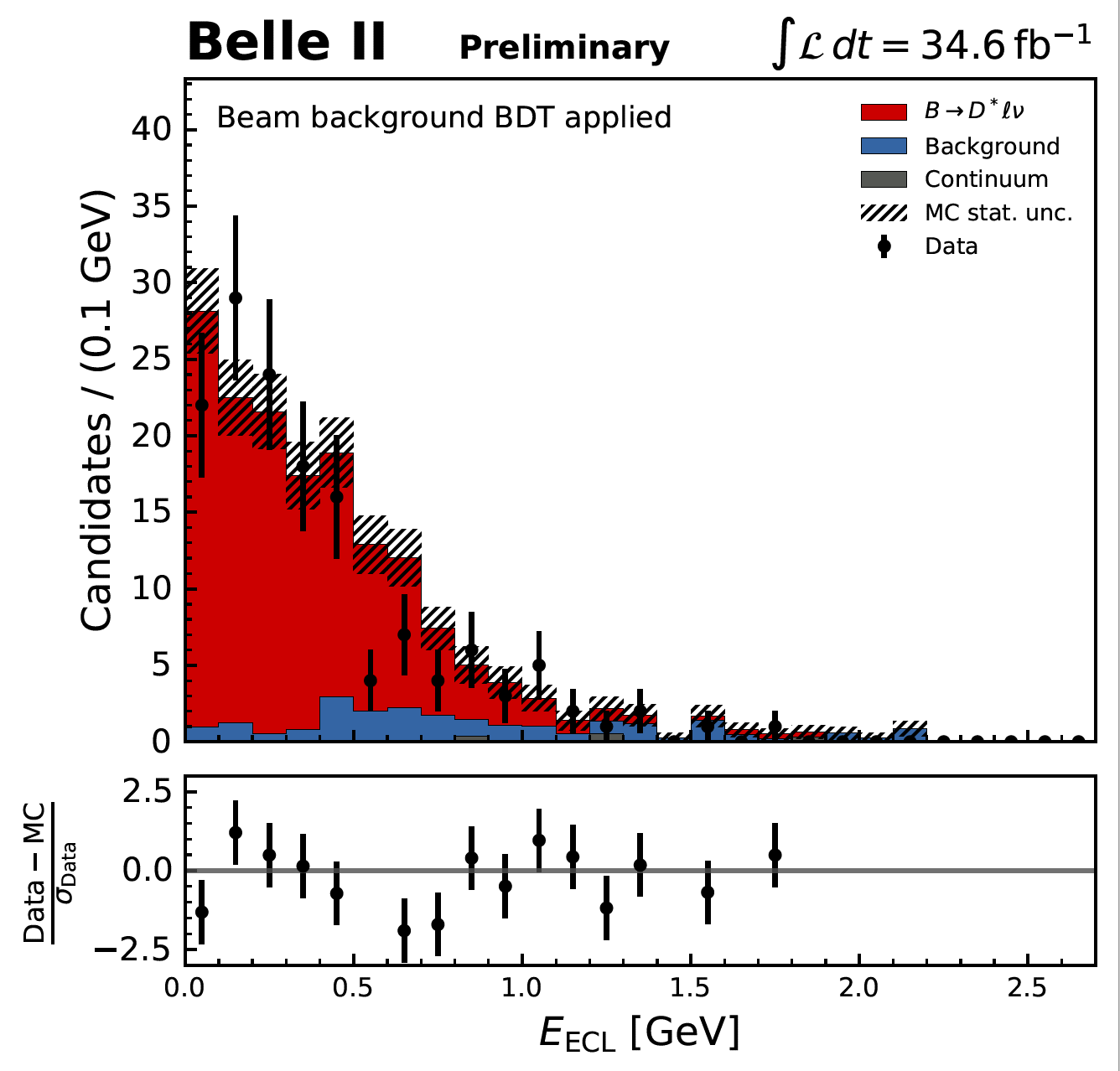 Rediscovery of B0 → pi- l+ nu (using the hadronic FEI)

We use the Full Event Interpretation (FEI) to search for the elusive B^0 \to \pi^- \ell^+ \nu decay. This channel will be very important for the precise measurement of the magnitude of the CKM matrix element Vub, which determines the strength of the coupling between the b (bottom or beauty) and the u (up) quarks.

The powerful suppression of the backgrounds guaranteed by the FEI allows us to observe 21 signal events (with a statistical significance of 5.7 standard deviations), peaking around 0 in the distribution of the missing mass squared variable. The measured branching fraction is \mathcal{B}(B^0 \to \pi^- \ell^+ \nu) = (1.58 \pm 0.43 \pm 0.07) \times 10^{-4}. This result agrees well with the World Average and with our expectations and paves the way towards a dramatic improvement on the precision of |V_{ub}|, which will be accessible with the full Belle II dataset. 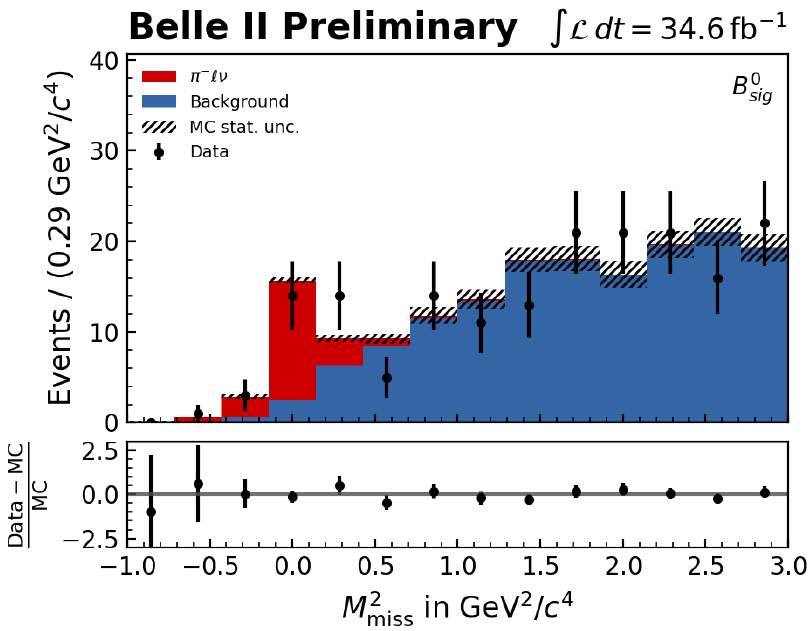 Calibration of the Belle II B FlavorTagger

The ability to determine whether a neutral B meson was a B^0 or a \overline{B}^0 (B flavor tagging) is a fundamental ingredient for the analysis of CP violation in B decays, in which one of the two B candidates in the event is fully reconstructed. We achieve this by detecting charged and neutral particles not associated to the reconstructed B and combining the information (such as the electric charge and momentum of leptons, kaons, pions, and the presence of neutral kaons or (anti-)\Lambda^0  particles) in a multi-layer multivariate discriminator.

In this analysis, we test the performance of the Belle II Flavor Tagger for the first time on the data, by reconstructing a number of flavor-specific hadronic B decays. The effective flavor tagging efficiency is measured to be \varepsilon_{\rm eff} = (33.8 \pm 3.6 \pm 1.6) \% , in good agreement with our expectations. This is slightly better than the flavor tagging performance of the previous Belle detector, especially thanks to the more efficient and sophisticated algorithms that have been developed for Belle II. 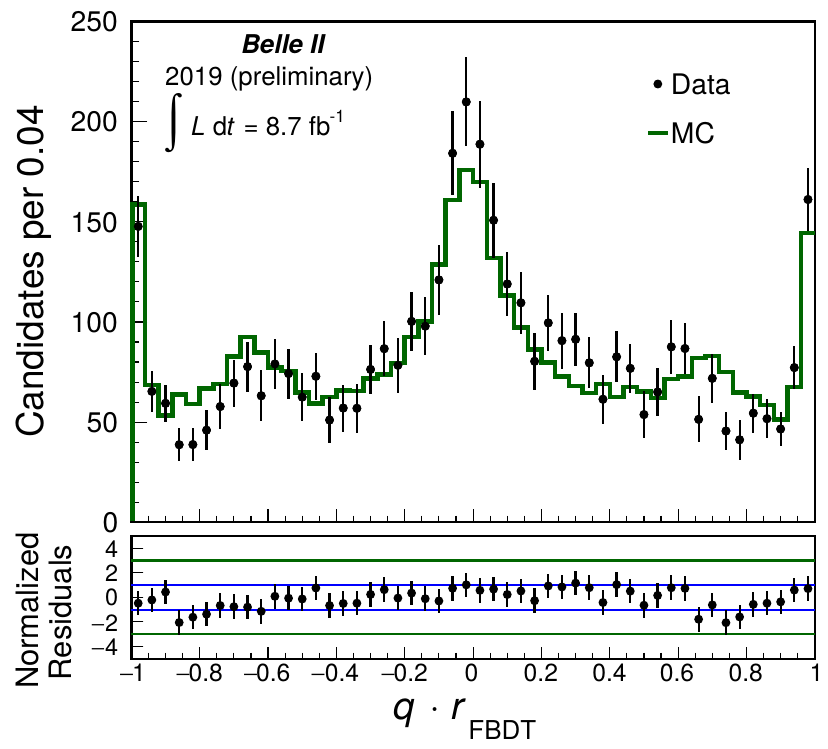 Rediscovery of B → phi K(*) decays, and measurement of the longitudinal polarization fraction of B → phi K*

The B \to \phi K^0_S decays is one of the most promising channels for detecting New Physics amplitudes which may shift the time dependent CP asymmetry away from the value (as expected in the Standard Model) that is measured in B^0 \to J/\psi K^0_S. Moreover, the angular analysis of the B \to \phi K^* decays shows a value of the "longitudinal polarization fraction" f_L that is much lower than the early predictions, leading to the so-called "polarization puzzle".

While today the polarization puzzle seems to be understood, these decays are still very interesting to detect potential hints for new physics. In this analysis we search for the B^+ \to \phi K^+, \phi K^{*+} and B^0 \to \phi K^0_S, \phi K^{*0} decays,  utilizing a multidimensional maximum likelihood fit to extract the signal yields and the longitudinal polarization fraction of the \phi K^* modes. We observe all channels with a statistical significance greater than 5 standard deviations in all cases, with branching ratios in good agreement with the expectations, and the measurement of the longitudinal polarization fraction is well compatible with the results obtained by previous experiments.

Branching ratios and direct CP asymmetries of B → Charmless decays

Charmless B decays — decays of bottom quarks in quarks other than charm — provide unique access to fundamental parameters of the weak interactions that are particularly sensitive to the presence of as-yet unknown particles or interactions. Bottom and charm quarks are heavier, longer-lived partners of the quarks d and u, the fundamental constituents of ordinary nuclear matter. Charmless B decays are challenging. They occur in about one every 10 million superKEKB electron-positron collisions and, in the detector, appear similar to backgrounds from lighter-quark production that are about a million times more abundant. In addition, theoretical predictions are hard because calculations of the effects of the strong interaction, which contributes in addition to the weak interaction, are often intractable. Belle II sifted through about 40 million B\bar{B} meson pairs collected until mid-May 2020 to reconstruct 1500 charmless B decays in eight decay channels: B^0 \to K^+ \pi^-, B^+ \to K^+ \pi^0, B^+ \to K^0_S \pi^+, B^0 \to K^0_S \pi^0, B^0 \to \pi^+ \pi^-, B^+ \to \pi^+ \pi^0, B^+ \to K^+ K^- K^+, B^+ \to K^+ \pi^+ \pi^-.

We report measurements of branching fractions and decay-rate charge-asymmetries. The latter are sensitive to the nonconservation of charge-parity symmetry, a fundamental feature of the weak interactions, which are not invariant under mirror reflection. The analysis is finalized in simulated data before applying to experimental data to minimize experimenters’ bias. The core of the analysis is a stringent event selection based on (i) topology and energy-flow of the event, aimed at suppressing the predominant backgrounds from light-quark production, and (ii) on particle-identification to suppress background from misidentified non-signal B meson decays. The event yields are determined by fitting the distributions of the difference between observed and expected energy of signal B mesons. Signal yields are corrected for reconstruction efficiencies based on simulation and control samples. Results are compatible with known determinations and show detector performance comparable with the best results from the predecessor experiment, offering a reliable basis to assess projections for future reach. 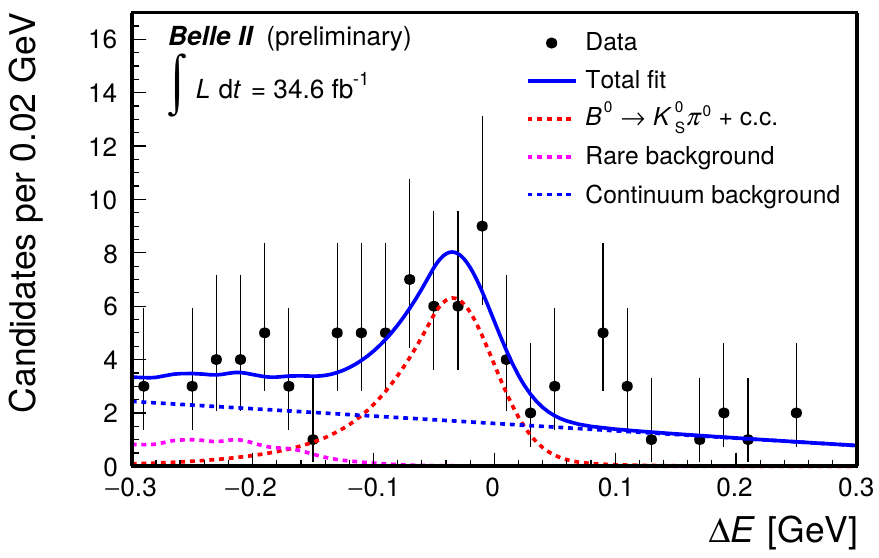 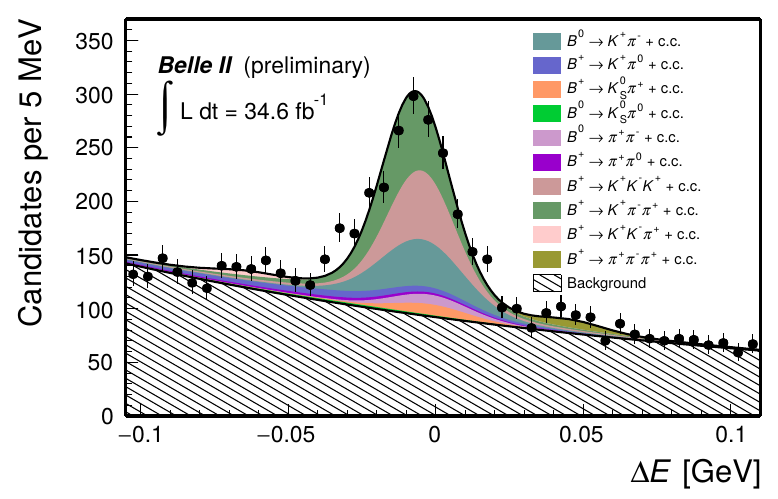 Measurement of the tau lepton mass

Precise measurements of the lepton properties provide stringent tests of the Standard Model (SM) and accurate determinations of its parameters. For example, the SM predicts unambiguous and simple relationships among the lepton lifetime, mass, and leptonic branching fractions. Deviations from the predictions at any level could signal the presence of physics beyond our present understanding; therefore, their experimental determination to the highest possible precision is essential. 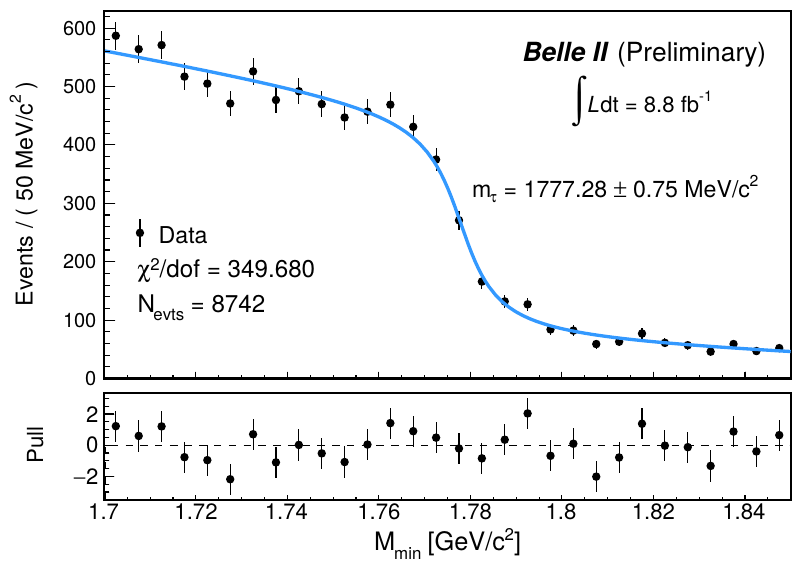 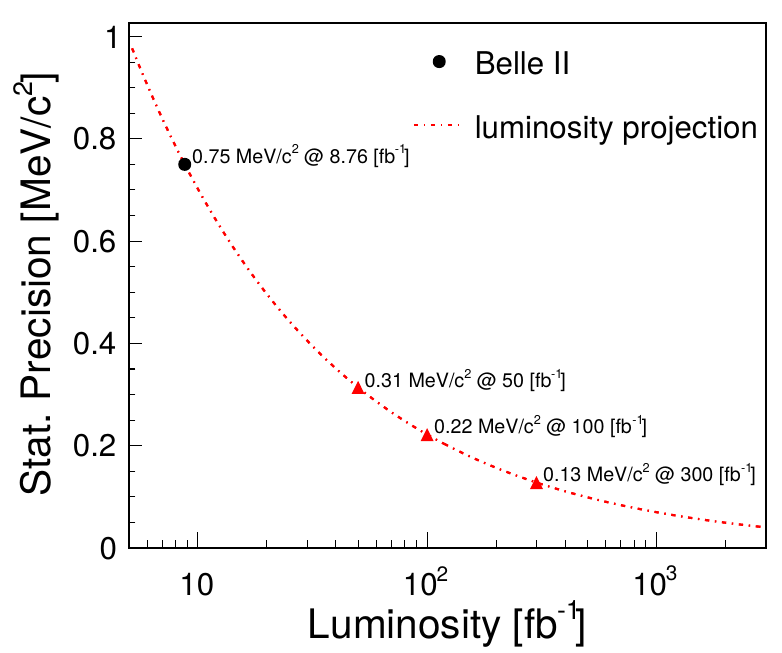 Public results based on data

Sensitivity studies based on the simulation